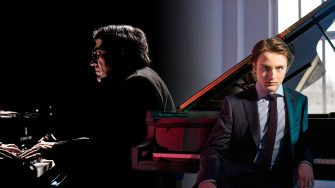 The Eastman Piano Series announces Daniil Trifonov and Sergei Babayan to perform in Kilbourn Hall at the Eastman School of Music on Wednesday, October 2, 2019 at 7:30 p.m. Daniil Trifonov, Musical America’s Artist of the Year, has been hailed as “a talent compelling and thrilling enough to lift you right out of your chair” (The Seattle Times).  He collaborates with Sergei Babayan, recognized for his “unequaled touch, perfectly harmonious phrasing, and breathtaking virtuosity” (Le Figaro). The two present a program featuring works of Prokofiev, Rachmaninoff, and Ravel.

“Few artists have burst onto the classical music scene with the incandescence of the pianist Daniil Trifonov,” the New York Times has written. A Grammy Award-winner, Tifonov has made a spectacular ascent in the classical music world as a solo artist, champion of the concerto repertoire, chamber and vocal collaborator, and composer. Combining consummate technique with rare sensitivity and depth, his performances are a perpetual source of awe. “He has everything and more…tenderness and also the demonic element. I have never heard anything like that,” marveled pianist Martha Argerich. Trifonov recently added a first Grammy Award to his already considerable string of honors, winning Best Instrumental Solo Album of 2018 with Transcendental, a double album of Liszt’s works that marks his third title as an exclusive Deutsche Grammophon artist. As The Times of London notes, he is “without a question the most astounding pianist of our age.”

Sergei Babayan is one of the leading pianists of our time. He is known for his emotional intensity, bold energy and remarkable levels of color. Born in Armenia, Sergei Babayan grew up in a musical family. He has won several first prizes in many international competitions such as the Cleveland International Piano Competition, the Hamamatsu Piano Competition, and the Scottish International Piano Competition. Sergei Babayan has worked with many conductors, including David Robertson, Neeme Järvi, Yuri Temirkanov, Thomas Dausgaard, Tugan Sokiev, and Dima Slobodeniouk, among many others. He has performed in several well-known places such as Carnegie Hall and the Warsaw Philharmony among many others. He is a Deutsche Grammophon exclusive artist.

Tickets for Trifonov and Babayan are available from $31.  $10 Student Tickets may be available on the night of the concert. Tickets can be purchased at the Eastman Theatre Box Office, 433 East Main Street, 9:30 a.m. – 2:30 p.m. Monday-Friday; by phone (585) 274-3000; or online at http://eastmantheatre.org. This performance is generously underwritten by the Fernando Laires Piano Fund.