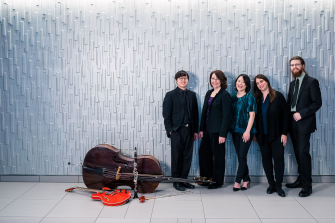 The University of Rochester’s Eastman School of Music and ArtistShare® have announced that the ensemble fivebyfive has been selected as an Eastman/ArtistShare New Artist Project. With flutist Laura Lentz, clarinetist Marcy Bacon, guitarist Sungmin Shin, bassist Eric Polenik and pianist Haeyeun Jeun, fivebyfive is the fourth project to be announced through the exclusive partnership of Eastman and ArtistShare, designed to recognize and support the careers and artistic development of exceptional Eastman students and alumni.

The Eastman/ArtistShare project will allow fivebyfive to reach a broader community by creating a studio recording that documents their commissioning project, Glass Works. Inspired by the stained-glass artistry of Judith Schaechter, fivebyfive will commission, perform, and record new music to accompany a retrospective exhibition of Schaechter’s works. Schaechter has explored and pushed the limits of the stained-glass medium for over 35 years. Her singular, subversive and masterful approach has altered the landscape of contemporary American art. The ensemble will perform the work live at the University of Rochester’s Memorial Art Gallery and the recorded performance will become a part of the installation as it tours museums around the country.

Photos can be found here: https://bit.ly/2m2B6nX

fivebyfive is a Rochester NY-based quintet formed in 2015 with a mission to engage audiences in the collaborative spirit and creativity of modern chamber music by commissioning, arranging and performing a wide range of works for its instrumentation. The group performs works of today’s leading composers, supports emerging composers from around the world, and collaborates with artists across the disciplines. Through its workshops and educational concerts, fivebyfive aims to spark young people’s unlimited creative potential and inspire a deeper understanding of today’s chamber music. With a commitment to accessibility, fivebyfive performs in a variety of settings, offering affordable or free programming and sensory-friendly events. fivebyfive became a 501(c)3 not-for-profit organization in 2017.

ArtistShare was founded in 2001 as the internet’s first crowdfunding platform, connects artists with fans in order to share the excitement and beauty of the creative process. The ArtistShare roster includes some of today’s most prestigious artists including Pulitzer Prize- and Oscar-nominated writers, Guggenheim fellowship recipients, Doris Duke Foundation Recipients, NEA Jazz Masters, and Eastman alumna, composer, and orchestra leader Maria Schneider. ArtistShare projects have received 32 Grammy nominations and 11 Grammy awards.

The Eastman School of Music was founded in 1921 by industrialist and philanthropist George Eastman (1854-1932), founder of Eastman Kodak Company. It was the first professional school of the University of Rochester. Mr. Eastman’s dream was that his school would provide a broad education in the liberal arts as well as superb musical training. More than 900 students are enrolled in the Collegiate Division of the Eastman School of Music—about 500 undergraduates and 400 graduate students. They come from almost every state, and approximately 23 percent are from other countries. They are taught by a faculty comprised of more than 130 highly regarded performers, composers, conductors, scholars, and educators. They are Pulitzer Prize winners, Grammy winners, Guggenheim Fellows, ASCAP Award recipients, published authors, recording artists, and acclaimed musicians who have performed in the world’s greatest concert halls. Each year, Eastman’s students, faculty members, and guest artists present more than 900 concerts to the Rochester community.