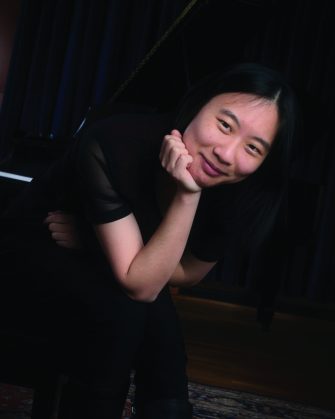 Pianist and Eastman School of Music student Alison Chiang will perform in Weill Recital Hall at Carnegie Hall on Thursday, October 24, at 8 p.m., as part of the Eastman Presents in New York series sponsored by Eastman Professor Douglas Humpherys.

Alison Chiang will be performing in memory of former Eastman School of Music Dean Douglas Lowry. Dean Lowry became the sixth head of the Eastman School in 2007 and was named the first Joan and Martin Messinger Dean in 2011. A composer, conductor, and academic leader, he resigned in 2013 for health reasons and passed away the same year. Prior to his coming to Eastman, he served as Dean at the University of Cincinnati-College Conservatory of Music and as Associate Dean of the Thornton School of Music at the University of Southern California in Los Angeles. The award bearing his name is presented each academic year to a graduate student majoring in piano, voice, or string instrument to recognize outstanding levels of performance and creativity and provide the recipient the opportunity to present a recital in a prestigious New York City concert hall.

A native of Rochester, New York pursuing her Doctorate in Piano Performance at the Eastman School of Music, Alison Chiang performs regularly at local senior homes and community centers in addition to her solo, chamber, and academic studies. She owes her musical development to her extraordinary teachers: Natalya Antonova and Nelita True at Eastman, Pamela Mia Paul at University of North Texas, and Olga Radosavljevich at the Cleveland Institute of Music.

“It is such a joy and blessing to have this opportunity to perform at Carnegie Hall,” says Alison, “which would not have been possible without the support and guidance of my teacher Natalya Antonova. As the culmination of my time here at Eastman, I have brought together two of my favorite pieces: the B-flat major sonatas of Schubert and Prokofiev.

“Schubert’s last sonata represents a poetic, spiritual and meditative journey in search of peace and joy, while Prokofiev’s last war sonata represents a struggle to overcome and sustain despite terror and oppression. While seemingly extreme contrasts, the two sonatas are responses to the same stimuli: that of human struggle in the face of imminent death. They are deep, dark, and personal statements of two different composers in two different time periods.”

Tickets for Eastman Presents Weill Recital Hall at Carnegie Hall are $30 for general public or $15 Student/Senior. Tickets can be purchased at the Carnegie Hall Box Office, at 57th and Seventh in New York City; by phone (212) 247-7800; or online at https://www.carnegiehall.org