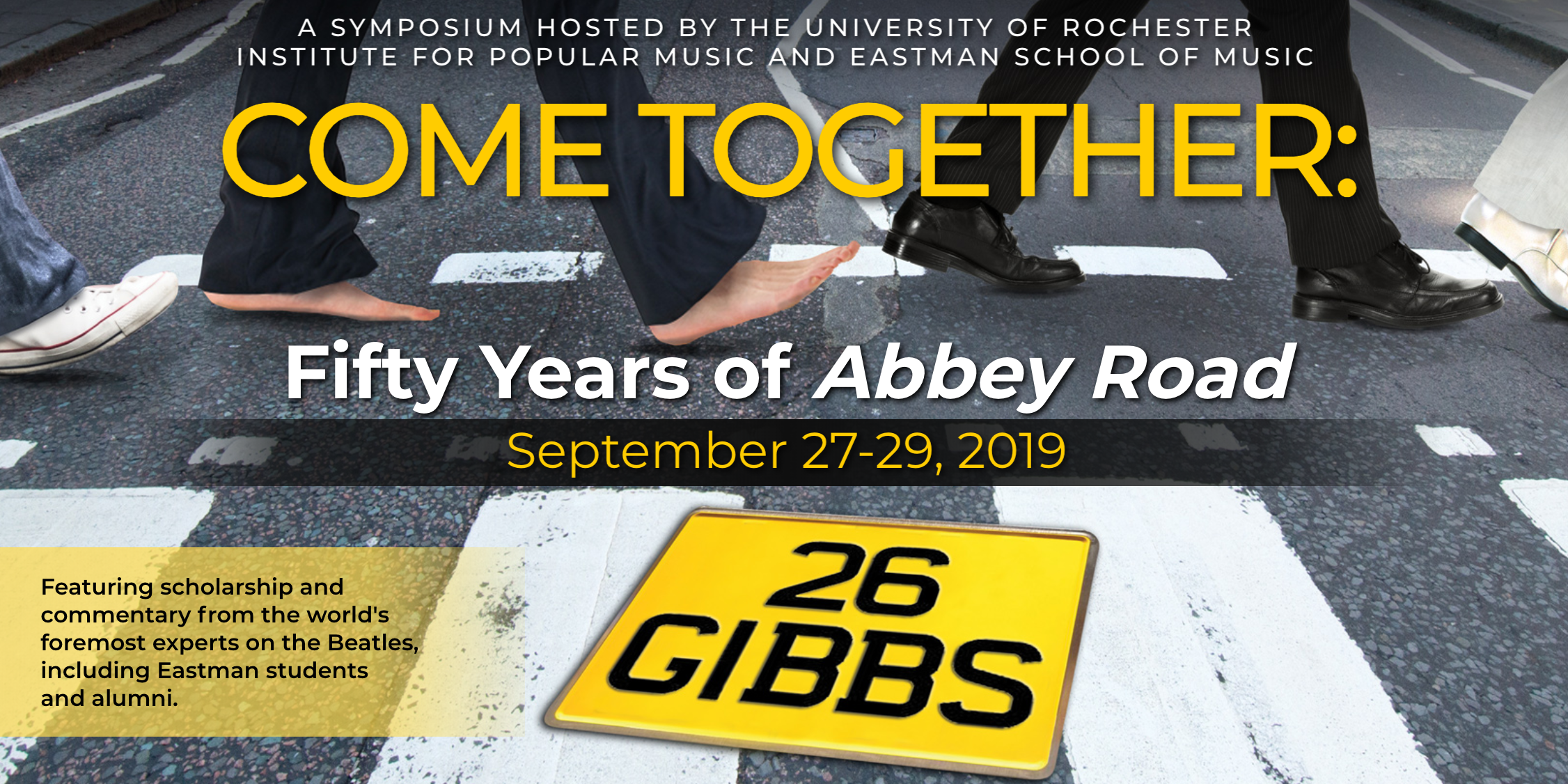 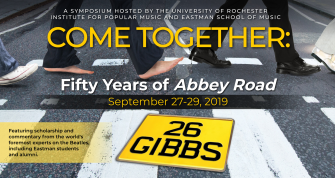 The Institute for Popular Music and Eastman School of Music at the University of Rochester will be hosting the Abbey Road Symposium September 27 through September 29. The interdisciplinary symposium will commemorate the 50th anniversary of the worldwide release of the Beatles’ Abbey Road, with scholarly presentations, keynote addresses, poster sessions and other special events open to the public.

The Symposium will feature scholarship and commentary from the world’s foremost experts on the Beatles, including Eastman students and alumni. University affiliated speakers include Joan Saab, Susan B. Anthony Professor and Vice Provost for Academic Affairs; Robert Fink ‘88E (MA), and Bruce Pilato, Instructor in the College Music Department. Featured Eastman and UR affiliated students and alumni include Ivan Tan (current Ph.D. student), and Donald Traut ’02E (PhD).

“We’re delighted to be able to host some of the world’s foremost Beatles experts and scholars here at Eastman.” Says John Covach, Director of IPM, Music Professor at the University of Rochester, and Theory Professor at Eastman. “There’s no question that the Beatles’ music played an important role in popular music during the second half of the twentieth century, so it is critical that music scholars understand the band’s music and the cultural context in which it was made.”

“Hosting the Abbey Road Symposium is the latest in a long line of collaborative projects between the Eastman School of Music and the Institute for Popular Music.” Says Jamal Rossi, Joan and Martin Messinger Dean of the Eastman School of Music. “The opportunity to delve deeply into some of the most universally-recognized music of the twentieth century is closely aligned with Eastman’s mission of melding artistry and scholarship.”

The conference will begin with registration and breakfast on Friday, September 27 at 8:00 a.m., with the conference welcome beginning at 8:50 a.m. The last session will conclude on Sunday, September 29 at 3:00 p.m. For a detailed program schedule, visit the Institute for Popular Music website https://www.rochester.edu/popmusic/program.html

Regular and student registration includes admission to all conference sessions, keynotes, and After Hours, along with breakfast (continental) and lunch on all three days of the conference. A separate ticket for Saturday night’s special dinner at the Inn on Broadway must be purchased in addition to regular registration. A discounted rate is provided for students, as well as an early registration discount valid through September 9.  A special reduced-price registration will be available starting on September 15 for those participants who would like to attend only the Friday and Saturday evening keynotes and After-Hours sessions.

If you are interested in registering or want more information visit:

About the University of Rochester

About the University of Rochester’s Institute for Popular Music