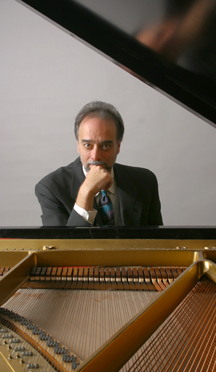 The Faculty Artist Series presents pianist Tony Caramia, Professor of Piano, Sunday, September 8, at 3:00 p.m., in Hatch Recital Hall, at the Eastman School of Music. In this concert, Celebrating the Music of Women, Caramia will be performing works by Lili Boulanger, Germaine Tailleferre, Madeleine Dring,  Dana Suesse, Cheryl Frances- Hoad and other women composers from the 20th and 21st centuries. Caramia will perform with fellow faculty pianists Sylvie Beaudette and Marina Lomazov.

Tony Caramia is Professor of Piano at the Eastman School of Music, where he is Director of Piano Pedagogy Studies and Coordinator of the Class Piano Program.  In May 2003, he was a guest on Marian McPartland’s Piano Jazz on NPR.  Her 1927 Steinway is now housed in his Eastman studio.  In September of 2007, he was privileged to perform in the dedication concert on the new “Sorel” Steinway at SUNY Fredonia, in honor of his former teacher, Miss Claudette Sorel. He received the 2010 Outstanding Achievement Award from SUNY Fredonia.

Caramia is known for his faculty artist series recitals being tied to a theme: an opportunity to teach and share, as well as play for a captive audience. As we approach the centennial of the Nineteenth Amendment giving women the right to vote, this program highlights key women composers – including living English composer Cheryl Frances-Hoad, with whom Caramia has established a working relationship, gaining access to several of her pieces.  He encouraged Eastman’s Sibley Music Library at Eastman to obtain Frances-Hoad’s two recent publications for solo piano called Hommages.

He has conducted numerous workshops in jazz piano for teachers at MTNA National and State Conventions; the International Association for Jazz Educators (IAJE) Teacher Training Institutes; the National Piano Teachers Institute, and the International Workshops; as well as the European Piano Teachers Association International Conference in London, the Australian Piano Pedagogy Conference in Adelaide, and the Institute of Registered Music Teachers National Conference in New Zealand.  In November 2014, he was invited to perform and lecture at the Meetings on Piano Pedagogy at the Federal University of Santa Maria, Brazil.  In June 2016, he was a guest artist and teacher at the Dakota Sky International Piano Festival.

He was a featured performer at the prestigious Rochester International Jazz Festival, recent National Conferences on Keyboard Pedagogy, and the 50th Anniversary of the New School for Music Study, in Princeton, New Jersey.  A strong advocate of theme recitals, he has presented multi-media tributes to composers George Gershwin, Billy Mayerl, Harold Arlen, Richard Rodgers, and Dana Suesse—The Girl Gershwin.  In 2015 he honored the centennial year of the extraordinary pianist Cy Walter.  In 2017 his students celebrated the 100th Anniversary Year of Women’s Right to Vote in New York State by performing music by women composers from 1917 to 2017— including world premieres of compositions by Ching-Shan Chang and Jon Lin Chua—at Rochester’s Hochstein School of Music & Dance.