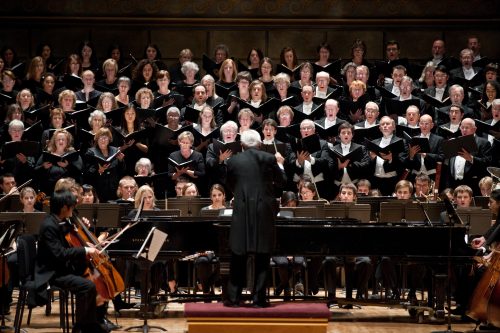 Conductor William Weinert leads the Eastman Philharmonia and Eastman-Rochester Chorus through Symphony of Psalms during the grand opening dedication concert for the new addition to the University of Rochester Eastman School of Music in Kodak Hall at Eastman Theatre December 10, 2010. //photo: J. Adam Fenster/University of Rochester

One of the Eastman School of Music’s most popular summer traditions is the “Eastman Summer Sings” – readings of popular choral repertoire open to the community and led by Eastman’s Director of Choral Activities, William Weinert; graduate students in choral conducting; and participants in the Eastman Summer Choral Institute. The popular four-session series returns on Tuesday evenings on July 9 and runs each Tuesday until July 30.

“This year marks the 25th anniversary of our Eastman-Rochester Chorus (ERC) Summer Sings,” shares Weinert.  “These events have become a highlight of the summer season for the Rochester choral community, and we’re again delighted to present some of the greatest choral masterworks.”

The scheduled Summer Sings repertoire and conductors for July are:

All readings and performances will take place in Eastman’s Kilbourn Hall. Musical scores will be provided. Admission is free, with donations are greatly appreciated. Ample parking is available in the East End Garage.

Enjoy singing choral masterworks at Eastman this summer? You can also do it throughout the year! Eastman-Rochester Chorus auditions for the 2019-2020 season are being held by appointment with William Weinert. There are openings for all voice parts, and no prepared solo is required for auditions. Rehearsals are held on Tuesdays, from 7:30-9:45 p.m., beginning in September.

The Eastman-Rochester Chorus repertoire for the 2019-2020 season is:

Vaughan Williams: Toward the Unknown Region

For more information or to make an audition appointment, call 274-1444 or email:

The Eastman-Rochester Chorus is open to all singers in the Western New York community by audition.  In keeping with the motto on the façade of the Eastman Theatre–“For the Enrichment of Community Life”–there is no membership fee.