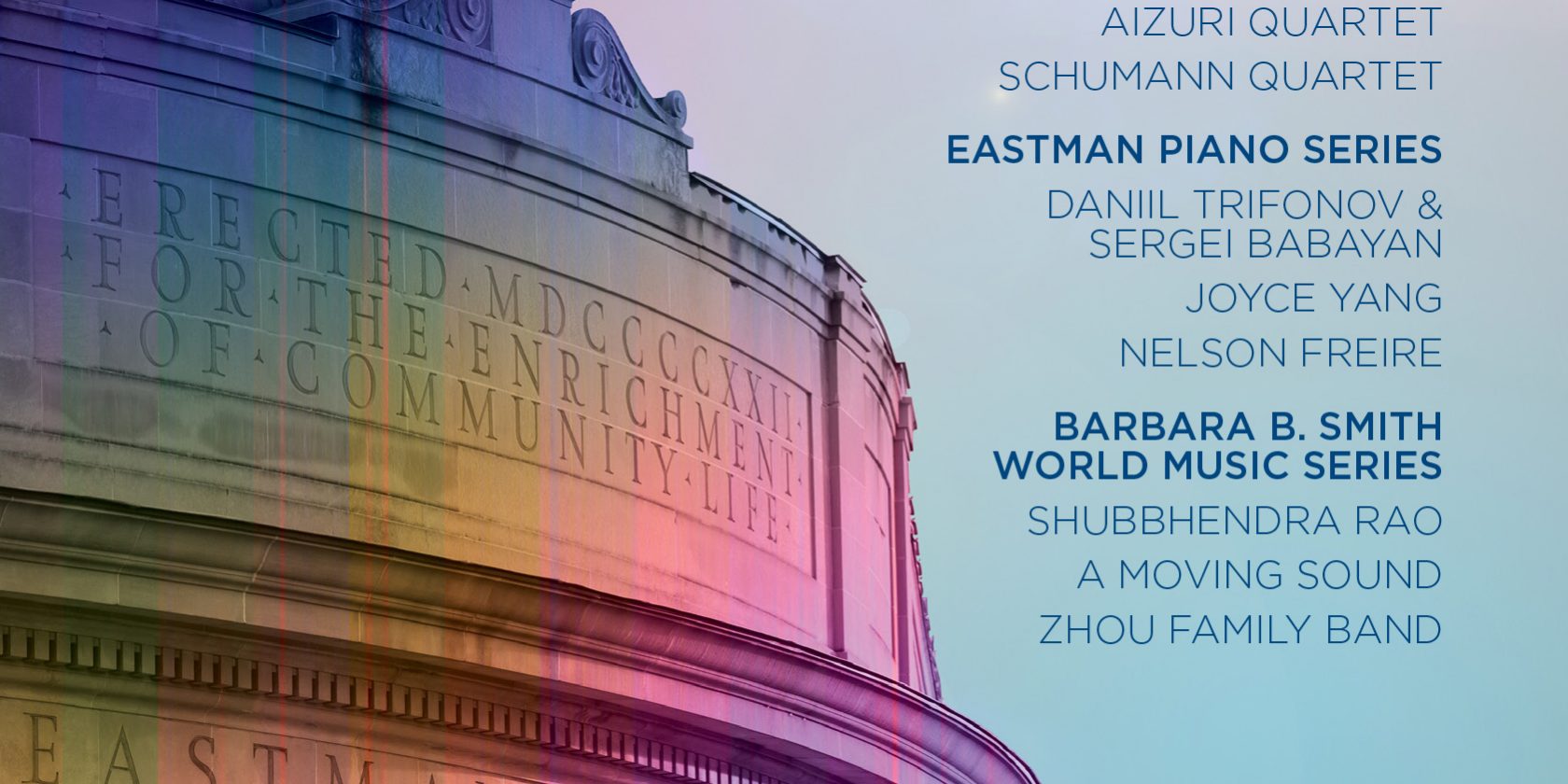 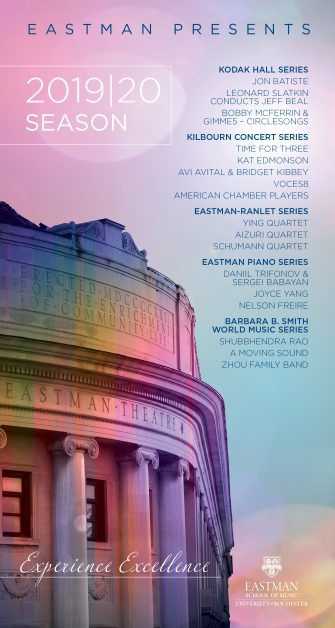 The Eastman School of Music is pleased to announce the details of the 2019-2020 Eastman Presents Season. Concerts in the each of the five series feature some of the world’s greatest artists performing in the three jewels at the Eastman School of Music: the acoustic and historic splendor of Kodak Hall at Eastman Theatre; Kilbourn Hall, one of the finest chamber music halls in the world; and Hatch Recital Hall, a gorgeous and modern performance hall.

Subscriptions to all series are on sale now and offer the best pricing of the season – including free concerts. Patrons are encouraged to purchase now to receive the highest level of savings.

Mike Stefiuk, Director of Concert Activities, shares, “Once again, we are thrilled to present an extraordinary array of international artists as part of the 2019-20 season of Eastman Presents.  Perhaps some of the names will be familiar ones, while others will not.  Either way, we hope that you’ll join in and take part in what will be an invigorating season of fine music making.”

Time for Three — violinist Nicolas (Nick) Kendall, violinist Charles Yang, and double-bassist Ranaan Meyer — is a group that happily and infectiously defies any traditional genre classification. With an uncommon mix of virtuosity and showmanship, the American trio performs music from Bach to Brahms and beyond, giving world premieres by Pulitzer Prize-winners William Bolcom and Jennifer Higdon as well as their own arrangements of everything from bluegrass and folk to ingenious mash-ups of Top 40 hits.

The British vocal ensemble VOCES8 is proud to inspire people through music and share the joy of singing. Touring globally, the group performs an extensive repertory in its a cappella concerts and in collaborations with leading orchestras, conductors, and soloists.

The first mandolin soloist to be nominated for a classical Grammy, Avi Avital has been compared to Andres Segovia for his incredible virtuosity. Called the “Yo-Yo Ma of the harp” by Vogue’s Senior Editor Corey Seymour, Bridget Kibbey is a winner of a prestigious Avery Fisher Career Grant, a Salon de Virtuosi SONY Recording Grant, and the Premiere Prix at the Journées de les Harpes Competition in Arles, France.

The American Chamber Players were formed in 1985 by Miles Hoffman from a core group of artists of The Library of Congress Summer Chamber Festival.  The ensemble performs repertoire ranging from familiar masterpieces to commissioned American works. Its fascinating and delightful programs, with varied instrumental combinations, have been as enthusiastically praised as its extraordinary, dynamic performances.

The Ying Quartet occupies a position of unique prominence in the classical music world, combining communicative performances with a fearlessly imaginative view of chamber music in today’s world. As Quartet-in-Residence at the Eastman School of Music, the ensemble will perform three Eastman-Ranlet Series concerts during the season.

The Schumann Quartet was praised by the Süddeutsche Zeitung as playing “staggeringly well… with sparkling virtuosity and a willingness to astonish.” The quartet’s many awards include the premier prix at the 2013 Concours International de Quatuor à Cordes de Bordeaux, the music prize of the Jürgen Ponto Foundation in the chamber music category in 2014, and first prize in the 2012 Schubert and Modern Music competition in Graz, Austria.

Through its engaging and thought-provoking programs, branded by The New York Times as “genuinely exciting” and “imaginative,” the The Aizuri Quartet has garnered critical acclaim for bringing “a technical bravado and emotional power” to bold new commissions, and for its “flawless” (San Diego Union-Tribune) performances of the great masterpieces of the past.

Grammy Award-winning Russian pianist Daniil Trifonov – 2019 Musical America Artist of the Year and winner of Gramophone’s 2016 Artist of the Year award – has made a spectacular ascent in the classical music world as a solo artist, champion of the concerto repertoire, chamber and vocal collaborator, and composer. Sergei Babayan is one of the leading pianists of our time. Hailed for his emotional intensity, bold energy and remarkable levels of color, Babayan brings a deep understanding and insight to an exceptionally diverse repertoire. Sponsored by and generously underwritten by The Fernando Laires Piano Fund.

Blessed with “poetic and sensitive pianism” (Washington Post), Grammy-nominated pianist Joyce Yang captivates audiences with her virtuosity, lyricism, and interpretive sensitivity. In the last decade, Yang has showcased her colorful musical personality in solo recitals and collaborations with the world’s top orchestras and chamber musicians through more than a thousand debuts and re-engagements. Generously underwritten by Vincent and Christina Lenti.

Nelson Freire is among the most admired pianists of his generation, having played with the leading orchestras and conductors in the most prestigious recital halls, and in collaboration with the finest violinists, cellists, and fellow pianists. He has also recorded extensively in a wide range of repertory for numerous major labels, including Deutsche Grammophon, Sony, Philips, and Decca. Sponsored by and generously underwritten by The Fernando Laires Piano Fund.

Composer and performer Shubhendra Rao is ranked among the key soloists of India. A protégé of world-renowned Sitar maestro Pandit Ravi Shankar, Shubhendra has established himself not only as a master of his instrument but also as a thinking musician, constantly endeavoring to carry his instrument beyond conventional boundaries. This concert features a classical music duet of Shubhendra Rao on Sitar and Saskia Rao-de Haas on Indian Cello accompanied by Aditya Kalyanpur on Tabla.

Zhou Family Band plays traditional wind and percussion music which have accompanied birth and death celebrations of the people of Central-Eastern China for more than 600 years. The Zhou family have been musicians for seven generations, and are bearers of a tradition that represents the finest of Chinese folk music.

Fusing traditional influences with a global sensibility, award-winning Taiwanese ensemble A Moving Sound has built a worldwide following through its joyous mix of original music and dance. Featuring the distinctive timbres of the erhu (Taiwanese fiddle) and zhong ruan (lute), and coupled with the transcendent vocals of Mia Hsieh, A Moving Sound has devised a unique and compelling style that is all its own.

Opening the 2019/20 Kodak Hall series – and celebrating Meliora weekend here at Eastman – is acclaimed singer, composer, multi-instrumentalist, and leader of the group Stay Human – since 2015 the house band of The Late Show with Stephen Colbert.  On his latest album, Hollywood Africans, Batiste weaves an intimate and emotional tapestry out of original material and Americana standards that carries the listener from the early jazz of New Orleans to the present day.

This unforgettable evening features the finest jazz soloists and ensemble players today. The Jazz at Lincoln Center Orchestra, helmed by legendary Music Director Wynton Marsalis is one of the most remarkably versatile orchestras and is known for their vast repertoire ranging from original compositions, and Jazz at Lincoln Center-commissioned works, to rare historic compositions and masterworks by Duke Ellington, Count Basie, Thelonious Monk, Mary Lou Williams, and many others.

Eastman School of Music graduate Jeff Beal (BM ’85) is an Emmy-award winning American composer of music for film, media, and the concert hall.  With musical beginnings as a jazz trumpeter and recording artist, his works are infused with an understanding of rhythm and spontaneity. Internationally acclaimed conductor Leonard Slatkin maintains a rigorous schedule of guest conducting throughout the world and is active as a composer, author, and educator. Grammy Award-winning singer, songwriter and actress Hila Plitmann is a glittering jewel on the international music scene, known worldwide for her astonishing musicianship, light and beautiful voice, and ability to perform challenging new works. Featuring Stephen King’s short story, Battleground, Beal’s new song cycle The Paper Lined Shack, and more!

For decades Bobby McFerrin has broken all the rules. The ten-time Grammy winner has blurred the distinction between pop music and fine art, goofing around barefoot in the world’s finest concert halls, exploring uncharted vocal territory, inspiring a whole new generation of a cappella singers and the beatbox movement.

Widely regarded as one of the major music influencers of our generation, rock sensation Ben Folds joins the Rochester Philharmonic for an evening of genre-bending music, performing hits songs like “The Luckiest”, “Capable of Anything”, and “Landed”. The multi-platinum selling artist, who was a judge for five seasons on NBC’s critically acclaimed a capella show The Sing Off, has recorded numerous solo and collaboration records, including music for film and TV and a classical piano concerto that topped the Billboard charts.

Subscriptions to all of the Eastman Presents Series are on sale now and can be purchased by calling (585) 274-3000, Monday-Friday, 10 a.m.-3 p.m.  Or, visit the Eastman Theatre Box Office in person at 26 Gibbs Street.