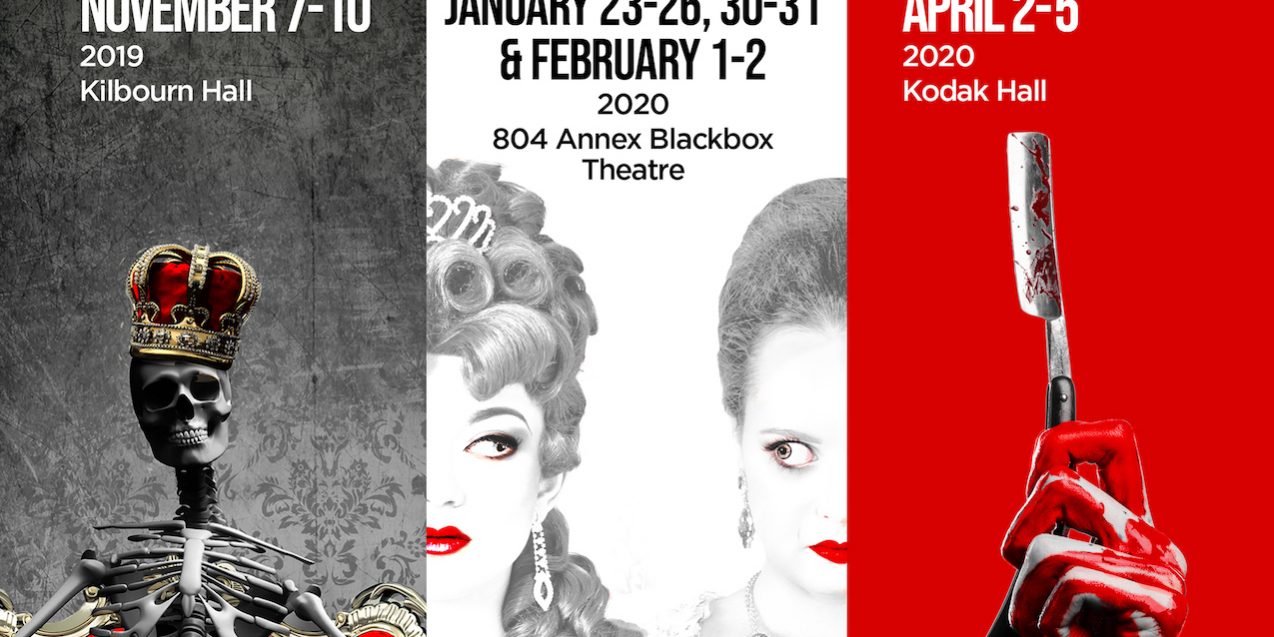 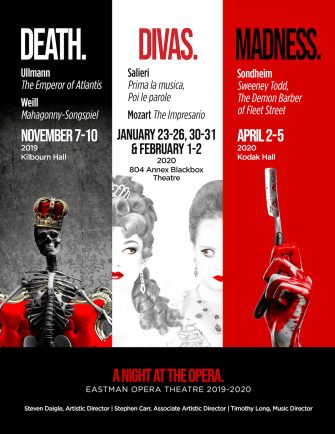 Eastman Opera Theatre is thrilled to announce its 2019-2020 season, including Der Kaiser von Atlantis (The Emperor of Atlantis), music by Viktor Ullmann with lyrics by Peter Kien; Mahagonny Songspiel, music by Kurt Weill and lyrics by Bertolt Brecht- presented in the fall as a double-bill; another double bill, consisting of Prima La Musica, Poi le Parole (First the Music, Then the Words), music by Antonio Salieri with lyrics by Giovanni Battista Basti; Der Schauspieldirektor (The Impresario), music by Wolfgang Amadeus Mozart, lyrics by Gottlieb Stephanie; with the final show being Sweeney Todd, The Demon Barber of Fleet Street, with music and lyrics by Stephen Sondheim and book by Hugh Wheeler.

“The EOT 2019 – 2020 season represents another relevant and thought-provoking lyric theater experience for our students and audiences,” shares Steven Daigle, co-chair of the Voice and Opera Department, and Director of Eastman Opera Theatre (EOT). “Every year, Eastman Opera Theater tries to push the boundaries of presenting works that challenge both the vocal and theatrical demands of the aspiring young singer.  This season is no different!”

Launching the season, Der Kaiser von Atlantis and Mahagonny Songspiel will be presented as a double-bill in Kilbourn Hall (November 7-10), directed by Stephen Carr, Associate Artistic Director of Eastman Opera Theatre with musical direction by Wilson Sutherland.  Long gives some insight into the productions: “Viktor Ullman’s chamber opera, The Emperor of Atlantis, is a stellar work written in the Terezin concentration camp during World War II, and was the first opera I ever conducted. This little-known masterpiece, a strong allegory for our time, will be juxtaposed with the unique and entertaining Mahagonny-Songspiel. In this fascinating piece from 1920s Germany, Kurt Weill and Bertolt Brecht comment on the irresistible decline of our existing social classes.”

Prima la Musica … and Der Schauspieldirektor will be the Black Box Studio production (January 23-26, 30-31 and February 1-2), directed by Ian Silverman, an Eastman Directing Master of Music Candidate, with musical direction by Timothy Long, Music Director of Eastman Opera Theatre. These two short operas – one by Mozart and the other by his great rival Antonio Salieri — were originally presented as a double bill in February 1786, and each is a highly amusing send-up of the creation of an opera, with character that range from poets with writer’s block to rival divas fighting over star billing.

The final 2019-2020 production is Stephen Sondheim’s masterpiece Sweeney Todd, The Demon Barber of Fleet Street (April 2-5, Kodak Hall), directed by Daigle, with musical direction by Long.  Closing the season with such a bold choice was an easy one, according to Daigle. “The horrific and tragic Sondheim musical Sweeney Todd is now becoming standard repertoire with American opera companies. The story, characters, musical and theatrical demands will offer our students the opportunity to inhabit a work that will challenge and elevate their technical growth as singers and actors, and their educational experience at Eastman.”

Long echoes this sentiment, adding, “One of the greatest stage works of our time, Sweeney Todd is an all-time favorite. There is no sound like Sondheim performed with a symphony orchestra, and Eastman Opera Theatre will join together with the Eastman Philharmonia to create a rare theatrical experience in honor of Stephen Sondheim’s 90th birthday.”

The 2019-2020 Eastman Opera Theatre season represents the full spectrum of the operatic canon, including two operatic double bills as the fall and winter productions. Says Stephen Carr, stage director for the fall and winter shows, “the variety of this season’s exciting offerings, musically, theatrically, and linguistically, illustrates Eastman Opera Theatre’s commitment to exposing our students and our audiences to a wide breadth of repertoire.”

Tickets are on sale now with $24 General Admission. $10 student tickets available. Tickets can be purchased at the Eastman Theatre Box Office, 26 Gibbs St.; by phone (585) 274-3000; or online at http://eastmantheatre.org