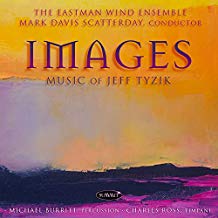 On Monday, May 6 at 7:30 p.m. in Kodak Hall, the Eastman Wind Ensemble, under its director Mark Davis Scatterday, will present its final concert of the academic year. The concert features two Eastman alumni as soloists: Chien-Kwan Lin, currently Associate Professor of Saxophone at Eastman; and flutist Jessica Sindell, assistant principal flutist of the Cleveland Orchestra.

Several of these works and composers have close associations with the Eastman Wind Ensemble. Jeff Tyzik ‘73E, ‘77E (MM) has written frequently for the EWE, which recently released Images, a recording of several Tyzik works, on the Summit label. The Night Soliloquy by Kent Kennan ‘34E, ‘36E (MAS) (1913-2003) is his most popular work and a standard of the flute repertoire. The symphonies and other wind ensemble works by the late American composer David Maslanka (1943-2017) are frequently performed by the EWE.

The following evening, Tuesday, May 7, the EWE travels to Cleveland to perform its Kodak Hall program in Cleveland’s Severance Hall (the home of the Cleveland Orchestra).

One of America’s most innovative and sought-after pops conductors, Jeff Tyzik began his association with the Eastman Wind Ensemble (EWE) under the direction of Donald Hunsberger at the Eastman School of Music in 1970. Tyzik considers his time in the EWE as one of the most important influences in his 40-year career in music. Through his association with the EWE’s current director Mark Scatterday, Tyzik has composed several new works for the ensemble and has enjoyed producing EWE recordings.  Jeff Tyzik is currently the Principal Pops Conductor with the Detroit, Dallas, Oregon, and Florida Orchestras, and has held the Principal Pops Conductor position with the Rochester Philharmonic Orchestra (RPO) for the past twenty-five seasons.

Chien-Kwan Lin has appeared as soloist and guest artist with the United States Navy Band, the Eastman Wind Ensemble, the Boston Modern Orchestra Project, the Tanglewood Festival Orchestra, the New World Symphony, and the Portland (ME) Symphony, as well as the philharmonic and chamber orchestras of Boston, Rochester, Sichuan, and Thailand. He holds degrees from the New England Conservatory (BM, MM) and Eastman (Performer’s Certificate, DMA). Mr. Lin is currently Associate Professor of Saxophone at the Eastman School of Music, where members of his studio have been frequent competition prizewinners.  He is the founder and director of the Eastman Saxophone Project (ESP), and received the 2012-2013 Eisenhart Award for Excellence in Teaching.

Jessica Sindell joined The Cleveland Orchestra in 2018 as assistant principal flutist, after serving as the solo piccolo player of the Rochester Philharmonic Orchestra and principal flutist of the Oregon Symphony Orchestra. Ms. Sindell has been principal flute with the San Diego Mainly Mozart Festival and the Colorado Music Festival, and guest principal flute with the Seattle Symphony Orchestra. She has performed with the Lake Tahoe Music Festival Orchestra since 2012, and frequently performs and records at Montana’s Tippet Rise Arts Center. Jessica Sindell received her Bachelor’s degree (‘11E) in flute performance from Eastman ’11E, studying under Bonita Boyd. She received consecutive fellowships to participate in the Aspen Music Festival and School during the summers of 2011 through 2013, and at the Music Academy of the West in 2014.