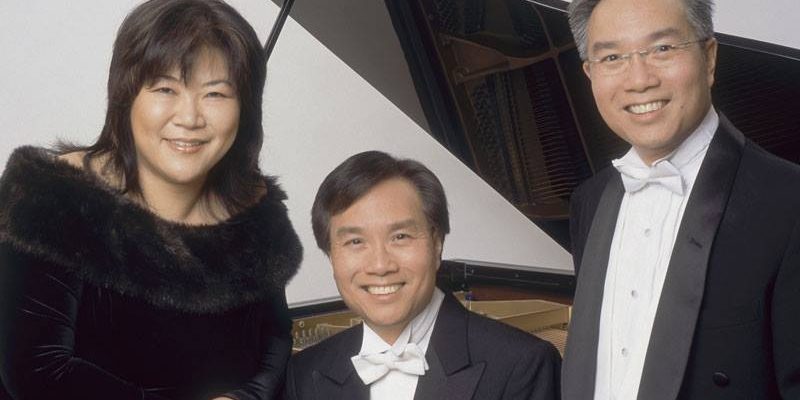 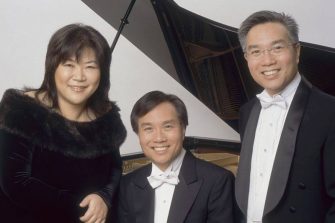 The Cheng-Chow Trio is a trio of pianists: identical twin brothers Alan and Alvin Chow, with Alvin’s wife, Angela Cheng. All three pianists are acclaimed performers in their own right, but they provide a unique concert experience for all ages when they combine forces.

Eastman Associate Professor of Piano Alan Chow has performed to critical acclaim in recital and in concert in such major venues as New York’s Lincoln Center and Merkin Hall and Chicago’s Symphony Center and Ravinia and with orchestras in the United States and Asia. This included concerto performances with the National, Pan Asian, Utah, Oakland, Kansas City, and Omaha Symphonies and the Hong Kong, Shanghai, and Tulsa Philharmonics. Chow won First Prize at the Concert Artists Guild International Competition and the Silver Medal and Audience Favorite Prize at the Gina Bachauer International Piano Competition and was formerly a member of the artist faculty at Northwestern University’s Bienen School of Music.

Alvin Chow has appeared throughout North America and in Asia as an orchestral soloist and recitalist. Chow has performed in major concert halls including the Kennedy Center in Washington, D.C.; Orchestra Hall in Chicago; Weill and Steinway Halls in New York City; and the Mozarteum in Salzburg, Austria. He has presented as recitalist in Hong Kong, Los Angeles, Seattle, Denver, Detroit, and Miami, and has appeared as soloist with the National Symphony Orchestra, Colorado Symphony Orchestra, Alabama Symphony Orchestra, Civic Orchestra of Chicago, Pan-Asia Symphony in Hong Kong, and the Mozarteum Orchestra in Salzburg, among others. Alvin Chow is currently a Professor of Piano at the Oberlin Conservatory.

Consistently praised for her brilliant technique, tonal beauty and superb musicianship, Canadian pianist Angela Cheng is one of her country’s national treasures. In addition to regular guest appearances with virtually every orchestra in Canada, she has also performed with the Alabama Symphony, Buffalo Philharmonic, Colorado Symphony, Houston Symphony, Indianapolis Symphony, Jacksonville Symphony, Louisiana Philharmonic, Saint Louis Symphony, San Diego Symphony, Syracuse Symphony, Utah Symphony, and the Israel Philharmonic.  In the spring of 2012, Ms. Cheng made her highly acclaimed Carnegie Hall debut with the Edmonton Symphony.  She also made her debut at the prestigious Salzburg Festival in a recital with Pinchas Zukerman during the summer of 2012. Angela Cheng is currently a Professor of Piano at the Oberlin Conservatory.