The Eastman School of Music Presents: The US Army Field Band and Soldiers Chorus 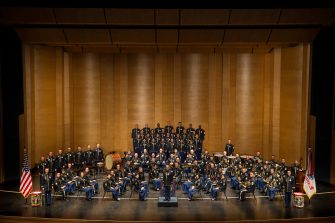 The Army Field Band will perform the “The Army Story.” Since 1775, the Army has been an integral part of our nation’s journey, through times of struggle and innovation. The Army Story brings audience members the music that has had a large impact on American culture and the perception of soldiers’ lives and sacrifices. Through musical and visual elements, The Army Story reminds Americans of the contributions, service and sacrifice of our soldiers.

“I am honored to welcome the United States Army Field Band to Rochester,” said Mayor Lovely A. Warren. “Our city is truly fortunate to be the home of the Eastman School of Music, which continues to create opportunities for our citizens to experience the nation’s highest caliber of musical talent. Events like this add to the cultural richness of Rochester, which further enhances our ability to create more jobs, safer and more vibrant neighborhoods, and better educational opportunities for our citizens.”

The Concert Band and Soldiers’ Chorus are the oldest and largest of The U.S. Army Field Band’s performing components. Founded in 1946 and 1957 respectively, these two ensembles combine to present joint concerts on national tours. The soldiers have performed in all 50 states and 30 foreign countries for audiences totaling hundreds of millions.

The 60-Member Concert Band and 29-member Soldiers Chorus perform regularly in some of the most famous concert halls in the world, and just as often in the humblest auditoriums in the smallest of communities. The joining of these two ensembles allows them to offer unparalleled versatility of programming, ranging from orchestral masterworks and operatic arias to Sousa marches, jazz classics, and selections from Broadway musicals. Featured repertoire for this concert will include works by Samuel A. Ward, John Stafford Smith, Bruce Broughton, Walter Kittredge, Irving Berlin, Gustav Holst, Mozart, Benji Pasek and Justin Paul, and many others.

“The Army remains committed to our soldiers, our veterans and our country and it is the people of the United States who we all serve,” said Col. Jim Keene, commander of the Army Field Band. “It’s a privilege to be in Rochester connecting America to its Army. Using the power of music, our soldiers pay tribute to all service members who have liberated the world and who have preserved America’s freedoms and our Constitution.”

The band and chorus also perform independently and have recently shared the stage with such ensembles as the Boston Pops, the Cincinnati Pops, the Detroit Symphony Orchestra, and the National Symphony Orchestra. In addition to their national tours, formal concerts, chamber recitals, and educational outreach, members of the Concert Band and Soldiers’ Chorus frequently represent the Army at formal and ceremonial functions, including the Presidential Inaugural Parade, presidential funerals, the Army All-American Bowl, and diplomatic efforts overseas.

Tickets for the Army Field Band performance are free but must be reserved either at the Eastman Theatre Box Office, 26 Gibbs Street, from 10 a.m.to 3 p.m., Monday-Friday; by phone (585) 274-3000; or online at http://eastmantheatre.org

About the Army Field Band

The U.S. Army Field Band tours nationally and internationally as directed by the Department of the Army and serves as the liaison between the Army and the American people. Its primary mission is to connect America to its Army through the universal language of music. The Army Field Band consists of four performing components and a far-reaching educational program. Local organizations sponsor each concert tour with the mission of supporting local community events such as centennial celebrations, festivals, and city and state commemorations. To become a sponsor or for more information, visit www.ArmyFieldBand.com.