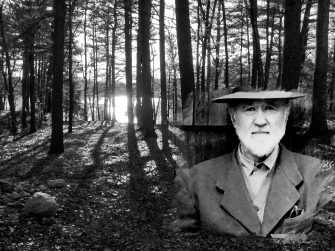 The Eastman School of Music will present a Lecture Recital on the “Concord” Sonata of Charles Ives on Wednesday, April 3, at 7:30 p.m. in Hatch Recital Hall. This lecture recital features American composer and author Jan Swafford, best-known biographer of Charles Ives, and pianist Heather O’Donnell, adjunct Professor of German at Eastman. They will be joined by Laura Lentz on flute.

This recital is a part of an event series focusing on the life and works of author Henry David Thoreau. The series, entitled “Thoreau and Creativity: A Celebration of Henry David Thoreau and American Transcendentalism,” is sponsored by the University of Rochester, the Eastman School of Music, and SUNY Geneseo.

Swafford gives some background on Ives music, sharing, “For Ives, music is not mere sound but the underlying spirit, human and divine. Thus, the paradox of Ives’s music, echoing his paradoxical person: he could be realistic, comic, transcendent, simple, complex, American, and European, all at the same time. If some of his music seems crowded nearly to bursting, it is a vibrant and entirely realistic portrayal of his conception of life, his sense of democracy in action, and of his own all-embracing consciousness. As Ives once said, Music is life.”

O’Donnell adds, “Charles Ives elevated the local to the universal and brought universal themes back to his Yankee homestead. He began an experimentalist tradition which continues on to today by playfully challenging musical dogma in the areas of tonality, rhythm and form. He adhered to a strong and reliable inner compass of decency and virtue and lived and worked uncompromisingly towards his ideals.”

Other events included in this series:

“The Death of Nature and the Life of Henry Thoreau.”

University of Rochester Department of English

Screening of Henry David Thoreau: Surveyor of the Soul

All concerts and lectures are free and open to the public.

Charles Ives “strove with great zeal and untiring investment towards the maddeningly impossible aim of reflecting a totality of human experience through music. Ives lived Transcendentalist ideals of spiritual awareness, intellectual independence, and idealism. His music was progressive, ever-expanding the tonal system within an aesthetic universe in which dissonance was an indication of strength and honesty. He began an experimentalist tradition which continues on today by playfully challenging musical dogma in the areas of tonality, rhythm, and form.” Heather O’Donnell, Responses to Ives CD, Mode Records

Jan Swafford is an American composer and author. He earned a Bachelor of Arts magna cum laude from Harvard College and his M.M.A. and D.M.A. from the Yale School of Music. He has written respected musical biographies of Charles Ives, Johannes Brahms, and Ludwig van Beethoven, as well as the introductory Vintage Guide to Classical Music. He writes regular columns on music and other subjects in Slate, and his heard as a commentator on NPR and the BBC. He is a regular program annotator for orchestras and venues including the Boston Symphony, Cleveland Orchestra, Chicago Symphony, San Francisco Symphony, the Metropolitan Opera, and Carnegie Hall.

Pianist Heather O’Donnell has performed the Concord Sonata over the past 25 years throughout North America, Europe, Asia, and Africa, and recorded Ives’s works for Mode Records. . She was a soloist with the St. Petersburg State Symphony, the Romanian State Philharmonic in Ploiesti, Mendelssohn Chamber Orchestra in Leipzig, and the Tanglewood Festival Chamber Orchestra. She plays a wide range music from Bach’s Goldberg Variations through major works of the 20th century and has given over 30 world-premieres of solo piano works. Heather O’Donnell was the first prize winner of the Gaudeamus Foundation Prize in the Fifth Krzysztof Penderecki International Competition in Kraków, Poland. She was also featured in German filmmaker Alexander Kluge’s cinematic representation of Marx’s Das Kapital.