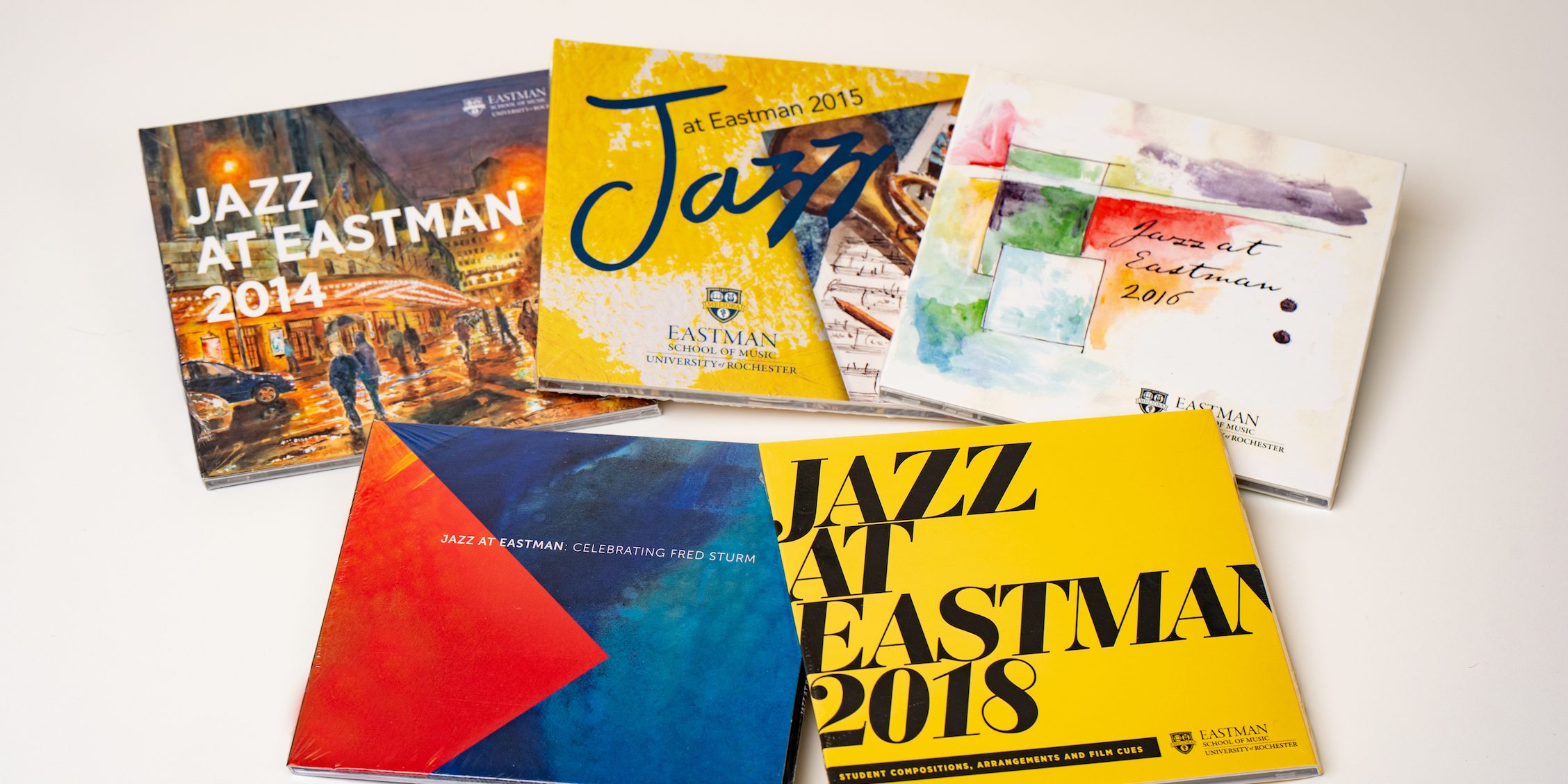 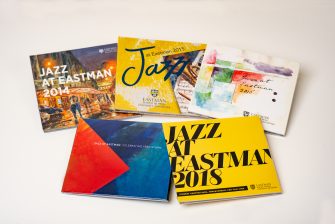 Capturing a definitive performance of one’s work can be a challenging task for even the most seasoned professional musicians. But for the Jazz Studies and Contemporary Media department (JCM) at the Eastman School of Music, the recording process has always been a crucial component of the learning process. For the past five years, the department has produced an annual recording highlighting the works of students in large and small group settings, giving student composers and arrangers the opportunity to lead and prepare a group of musicians, as well as receive studio time for recording their works.

Through the generosity of the Kenlou foundation, Eastman’s JCM Department is proud to present its fifth annual recording, Jazz at Eastman 2018. For this year’s project, students were invited to submit sample recordings of their compositions and arrangements. Student works were vetted by Jazz department faculty through a blind submission process, with nine pieces finally chosen for the album. These pieces were rerecorded at The Studio at Linden Oaks, one of Rochester’s premier recording studios.

“Having the opportunity to create an annual recorded document of our students’ work is invaluable for the JCM department,” shared Professor and department chair Jeff Campbell. “There is a palpable buzz at the recording session each year and the students truly rise to the occasion. These recordings provide a great educational tool, allowing our students the chance to present their work at a professional level.”

New to the project this year is the inclusion of five short film cues, composed by students from Eastman’s newly launched degree in Film Music and Contemporary Media, which was founded in 2016 and is now in its second year. This degree is under the umbrella of the Beal Institute for Film Music and Contemporary Media at Eastman School of Music; Directed by Emmy Award-winning composer and conductor Mark Watters, its mission is to provide students with instruction and experiences that prepare them for the increasing and evolving opportunities to write, produce, and perform music for film and contemporary media.

Professor Clay Jenkins adds, “The projects are professionally and artistically mixed, mastered, and packaged.  These CDs function as examples of the individual students’ works, as a recruiting tool, and as a representation of The Eastman School of Music and The Jazz and Contemporary Media Department.”

“Often times a music school like Eastman can prepare students concert to concert with plenty of opportunity for live performance. You practice your part and try to nail it, then you move on. From my own experiences, however, nothing prepares young musicians like forcing yourself into the studio,” shares Max Berlin (’18), a recent graduate of the JCM department, and one of the featured students on the past year’s CD projects. He continues, “Although the idea of recording can sound scary, the ability to hone in on a performance and prepare to capture a moment is something musicians will be doing their entire life. Recording is the chance to wrestle with an intimate snapshot of your music–which creates a kind of learning you cannot find in anything else. As I leave this institution, I now consider the recording studio to be one of the most exciting, vulnerable, and rewarding places for a musical and artistic career.”

The Jazz Studies and Contemporary Media recording project began in 2014, when the department held a competition and had students submit their works anonymously to the faculty. Nine pieces were chosen for the premier project, which was taken off campus to give the students the complete recording experience. The session took place on April 17, 2014, at The Studio at Linden Oaks. The students were responsible for all the preparation and rehearsal time, and each composer was given one hour of studio time to record their piece.

The 2015 recording consists of all the department’s curricular Jazz Performance Workshop’s small ensembles of the time, as well as three of Eastman’s large jazz ensembles. In 2016, the recording also featured the works of the great Bill Holman, in addition to a number of student compositions. One of these pieces, Arbitration, was commissioned by faculty member Bill Dobbins, coordinator of the Jazz Composition and Arranging Program. for the Eastman Jazz Ensemble; Holman conducted the premier performance during his residency that February.

The 2017 recording features the music of former faculty member, department chair, and alumnus Fred Sturm. Fred, who was at Eastman 1991-2002, was a beloved friend and cherished colleague to all who worked with him. The music on this recording was carefully selected in consultation with the Sturm family, and features Fred’s work as a composer, arranger, and conductor. In preparation for this project, Eastman’s vast archive provided recordings of different iterations of the Eastman Jazz Ensemble during Fred’s tenure as its director. Just before the final production of this recording, music was uncovered from a session where Fred, the Eastman Jazz Ensemble, and legendary producer Teo Macero collaborated to record Fred’s Take It All.

All five of the Eastman Jazz Studies and Contemporary Media Recordings can be purchased by visiting https://eastman.bncollege.com, under textbooks.