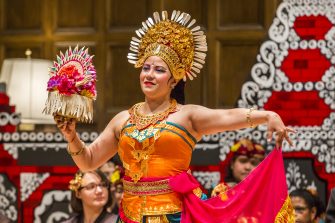 The Barbara B. Smith World Music Series brings Eastman Gamelan ensembles Lila Muni and Sanjiwani, performing Monday, April 29 at 7:30 p.m., for a colorful celebration of Balinese music and dance in Kilbourn Hall at Eastman School of Music. Sponsored by a generous gift from Barbara B. Smith, the World Music Concert Series brings the richness of global musical traditions to Eastman through performances by world-renowned artists.

Eastman’s gamelan ensembles perform throughout the northeastern United States and in Canada in programs of traditional and contemporary Balinese music, present interactive workshops for audiences of all ages, and engage in creative collaborations with Western musicians and composers. In recent years, we have collaborated with Bobby McFerrin and the Paul Winter Consort, and have premiered new compositions by composers Wayne Vitale, Robert Morris, Jennifer Fontana Graham, Daniel Ianantuono, John Orfe, and Payton McDonald, including a number of Eastman student composers.

Gamelan at Eastman, as in Bali, is a communal effort. Members include Eastman students, faculty, and staff, as well as many members of the Rochester community. The music is learned through the oral/aural tradition without the use of notation, and therefore requires the players to work together closely for long periods of time. The result is a sense of group unity and pride, as the audience hears the music and witnesses the collective efforts of the ensemble.