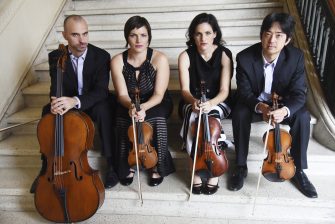 On Friday, March 8, 2019 at 12 p.m., the Jupiter String Quartet presents a free recital at the Eastman School of Music in Hatch Hall as part of the James E. Clark Chamber Music Residency. Established in 2014, the Residency aims to provide Eastman student ensembles with intense, up-close exposure to the playing and teaching of a world-renowned ensemble each Spring. Dr. Clark’s daughter Jamie (BM ’12) was an enthusiastic participant in the chamber music program at Eastman, which is what inspired him to give back to the school that had such a profound impact on his daughter’s education.

On this program, the Jupiter Quartet will perform Stravinsky’s Three Pieces for String Quartet; Dutilleux’s nocturnal masterpiece Ainsi La Nuit; and Mendelssohn’s darkly dramatic Quartet in A minor, Op. 13. Following the recital, there will be a Q & A with the audience.

In addition to the recital, the Jupiter Quartet will also hold private coachings with individual chamber music groups and lead a chamber music master class, open to the public, on Thursday, March 7 from 1 to 3 p.m. in Kilbourn Hall. Elinor Freer, Assistant Professor of Chamber Music and Chair of the Chamber Music Department says, “The Eastman Chamber Music Department is so grateful to Dr. Clark for making this residency possible each year. Allowing our chamber music groups the opportunity to interact up close with a world class guest ensemble each spring gives them new perspectives and fresh inspiration. The Jupiter Quartet is a wonderful model for our students, and we’re excited to welcome them to Eastman.”

Jupiter Quartet violist Liz Freivogel says, “We are so pleased to have the opportunity to work with Eastman students in our upcoming residency. Eastman has a particularly fine chamber music program, formerly overseen by the original Cleveland Quartet, and now guided by the fantastic Ying Quartet. With such dedicated students, we will be able to delve into the most interesting and intricate details of chamber music technique.”

Dr. James E. Clark, “This residency is not about me – it’s about the students, and that is the most important thing. I hope it is something that enhances their lives and gives them a bit of extra support so that they feel that they are going the right direction.”

The first Dr. James E. Clark Chamber Music Residency in 2015 brought the Juilliard Quartet to Eastman for two days of private coachings, as well as a public master class and performance in Kilbourn Hall. The second and third year of the residency followed a similar format, with guest artists the Brentano Quartet and the Kalichstein-Laredo-Robinson Trio. Both residencies fulfilled Dr. Clark’s goal of providing Eastman student ensembles intense, up-close exposure to both the playing and teaching of world-renowned ensembles. This is an endowed program and any contributions made are in support of the continuation of this residency.

Now in its sixteenth year, the Jupiter String Quartet is firmly established as an important voice in the world of chamber music. The quartet has performed in some of the world’s finest halls, including New York City’s Carnegie Hall and Lincoln Center, London’s Wigmore Hall, Boston’s Jordan Hall, Mexico City’s Palacio de Bellas Artes, Washington, D.C.’s Kennedy Center and Library of Congress, Austria’s Esterhazy Palace, and Seoul’s Sejong Chamber Hall. Its major music festival appearances include the Aspen Music Festival and School, Caramoor International Music Festival, Music at Menlo, the Banff Centre, the Seoul Spring Festival, and many others.

The quartet’s honors and awards include the grand prizes in the Banff International String Quartet Competition and the Fischoff National Chamber Music Competition; the Young Concert Artists International auditions in New York City; the Cleveland Quartet Award from Chamber Music America; an Avery Fisher Career Grant; and a grant from the Fromm Foundation. From 2007 to2010, the Jupiter Quartet was in residence at the Chamber Music Society of Lincoln Center’s Chamber Music Two. Since 2012, the members have been artists-in-residence at the University of Illinois in Champaign-Urbana, where they maintain private studios and direct the chamber music program.

The quartet chose its name because Jupiter was the most prominent planet in the night sky at the time of its formation, and because the astrological symbol for Jupiter resembles the number four. For more information on the Jupiter Quartet, visit www.jupiterquartet.com.