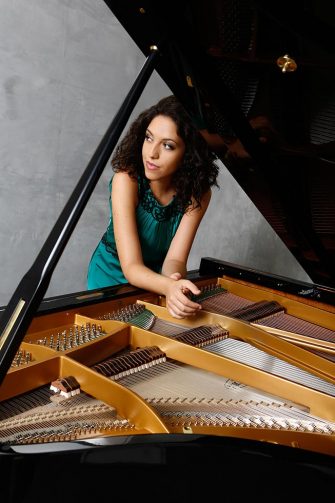 The Fernando Laires Piano Series presents Beatrice Rana on Friday, March 1, 2019 at 7:30 p.m., in Kilbourn Hall at the Eastman School of Music. It is this young artist’s highly anticipated return to Eastman. Rana’s performance consists of: Chopin’s Etudes, Op. 25; Ravel’s Miroirs, and Stravinsky/Agosti’s The Firebird.

Gramophone’s 2017 “Young Artist of the Year” Beatrice Rana is making waves on the international classical music scene, arousing admiration and interest from conductors, critics, and audiences around the world. Gramophone also commented: “Beatrice possesses an old soul that belies her twenty years, and more than a touch of genius.”

Beatrice Rana came to public attention in 2011, after winning First Prize and all special jury prizes at the Montreal International Competition. Her very promising career was brought to an even higher level in 2013, when she won the Silver Medal and the Audience Award at the 14th Van Cliburn International Piano Competition.  In September 2015 she was named a BBC New Generation Artist, and in April 2016 she was awarded a fellowship from the Borletti-Buitoni Trust.