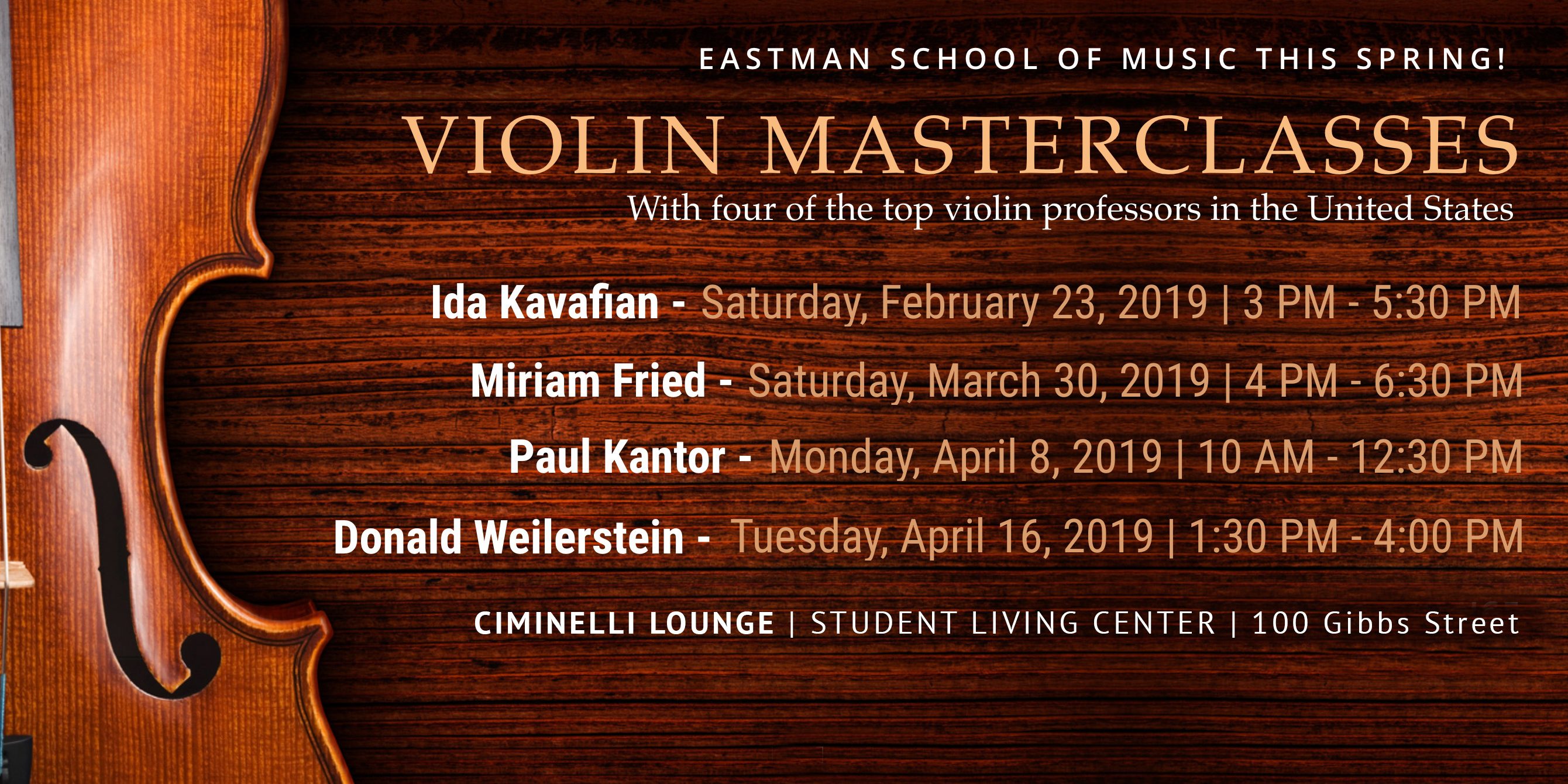 On the heels of famed violinist Leila Josefowicz gracing Eastman’s stage this fall, comes a series of Violin Masterclasses, bringing four of the top violin professors in the United States to the Eastman School of Music. These spring master classes include:

All four master classes are free and open to the public and take place in Ciminelli Formal Lounge, at the Eastman School of Music.

“It is so exciting to present violin master classes by four of the most highly regarded teachers in the country,” shares Phillip Ying, Associate Professor of Viola, member of the famed Ying Quartet and Co-Chair of the Strings, Harp and Guitar Department. “We are proud that our vibrant string program at the Eastman School of Music offers our students the opportunity to achieve their fullest potential in an environment of world-class artistry.”

Internationally acclaimed as a violist as well as violinist, the versatile Ida Kavafian is an artist-member of the Chamber Music Society of Lincoln Center and former violinist of the Beaux Arts Trio. For 34 years she has been artistic director of Music from Angel Fire in New Mexico. She was a founder of the Bravo! Colorado festival, serving as its artistic director for ten years. Since 1998, Ms. Kavafian has served on the faculty of the Curtis Institute of Music, where she received the 2013 Lindback Foundation Award for Distinguished Teaching. She also teaches at the Juilliard School and the Bard College Conservatory of Music.

Miriam Fried has been recognized for years as one of the world’s preeminent violinists. Fried has played with virtually every major orchestra in the United States and Europe and has been a frequent guest with the principal orchestras of Boston, Chicago, Cleveland, New York, Philadelphia, and Pittsburgh, as well as with the Israel Philharmonic, the London Symphony, the Royal Philharmonic, and the Vienna Symphony. Since 1993, she been chair of the faculty at the Steans Institute for Young Artists at the Ravinia Festival, where her involvement there has included regular performances, including recitals and concerts with the Chicago Symphony. She has also made a prize-winning, best-selling recording of the Sibelius Concerto for the Finlandia label with the Helsinki Philharmonic under the direction of Okko Kamu. Fried currently teaches at the New England Conservatory.

Paul Kantor is currently the Sally Shepherd Perkins Professor of Violin at the Shepherd School of Music at Rice University. He received his Bachelor of Music and Master of Music degrees from the Juilliard studying violin with Dorothy DeLay and chamber music with Robert Mann. Mr. Kantor has performed the world premieres of Dan Welcher’s Violin Concerto, (subsequently recorded with Larry Rachleff and Symphony II) as well as John Corigliano’s Red Violin Caprices. His recordings can be found on Equilibrium, CRI, Delos, and Mark Records. In 2014 he was honored with the Artist Teacher Award from the American String Teachers Association.

Donald Weilerstein has concertized extensively throughout the world as soloist and chamber musician. He studied at the Juilliard School with Ivan Galamian, Dorothy DeLay, and members of the Juilliard String Quartet, and was honored at graduation by the National Foundation of the Arts as an outstanding graduate of the school. For twenty years (1969–1989), Weilerstein was the first violinist of the renowned Cleveland Quartet. His recordings with the quartet have earned seven Grammy nominations and won Best of the Year awards from Time and Stereo Review. Weilerstein is a very active as a member of the highly acclaimed Weilerstein Trio, which is in residence at the New England Conservatory of Music. Weilerstein was formerly a professor of violin and chamber music at Eastman and is currently on the faculty of the New England Conservatory of Music and the Juilliard School.