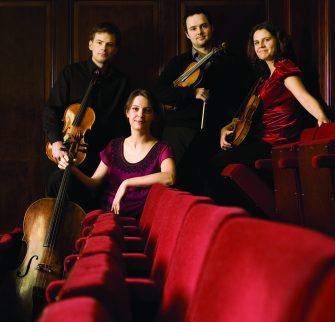 The Eastman-Ranlet Series bring the Elias String Quartet Sunday, March 24, at 3 p.m., in Kilbourn Hall at the Eastman School of Music. Taking its name from Mendelssohn’s oratorio, Elijah, of which Elias is the German form, the group has seen global success. Their program includes: Henry Purcell’s Fantasia in E Minor, Z. 741 and Fantasia in D Minor, Z. 739; Benjamin Britten’s String Quartet No.2 in C Major, Op. 36; and Schumann’s String Quartet in A Minor, Op. 41, No.1.

Known for its intense and vibrant performances, the Elias String Quartet has travelled the world, collaborating with some of the finest musicians and performing in the world’s greatest halls. Since its formation in 1998 at the Royal Northern College of Music, the quartet has become internationally acclaimed as one of the leading ensembles of its generation. The Philadelphia Inquirer notes, “Few quartets at any stage of their evolution have this much personality.”

Currently composed of Sarah Bitlloch, Donald Grant, Simone van der Giessen, and Marie Bitlloch, the Elias String Quartet met at the Royal College of Music in London and have since performed alongside such artists as Leon Fleisher, Michael Collins, and Christian Zacharias. They are passionate about new music, having premiered pieces by Sally Beamish, Colin Matthews, Matthew Hindson, and Timo Andres, and have recorded six albums, releasing the first in 2015.

Born of French and Catalan parents, Sara Bitlloch studied violin at Perpignan Conservatory. Participating in chamber music festivals across the globe, Bitlloch has had the opportunity to perform as a soloist with orchestras such as the Royal Philharmonic Orchestra and the Budapest Radio Symphony Orchestra, as well as alongside top musicians including Yehudi Menuhin, Leon Fleischer, and Miriam Fried.

Marie Bitlloch, a French/Catalan cellist also completing her studies at Perpignan Conservatory, has dedicated herself to chamber music. Performing alongside top artists such as Menahem Pressler, Claude Frank, and Vladimir Mendelssohn, Bittloch has also appeared as a soloist with orchestras such as the Stockport Symphony Orchestra and the Orchestra de cambra d’Andorra and has participated in music festivals around the world.

Hailing from the small village of Roybridge in the Highlands of Scotland, Donald Grant grew up immersed in traditional music, as his father was a Gaelic singer and teacher. Having recorded a solo album in 2009 titled, The Way Home, there is nothing more that Donald loves than collaborating. From playing and writing string arrangements to featuring on a futuristic folk album, Grant believes the more diversity, the better.

Violist Simone van der Giessen was born in Amsterdam and moved to the United Kingdom in 2002 to continue her violin studies with Jan Repko at the Royal Northern College of Music. It was in Manchester, that as a founding member of the Navarra String Quartet, chamber music became the center of her musical life. In 2004 she began studying viola with Predrag Katanic, and after graduating in June 2006 with First Class Honours, she won the RNCM’s Cecil Aronowitz Prize for viola and performed Walton’s Concerto with the RNCM Symphony Orchestra. She has also performed in the Royal Festival Hall after receiving a Martin Music Scholarship.