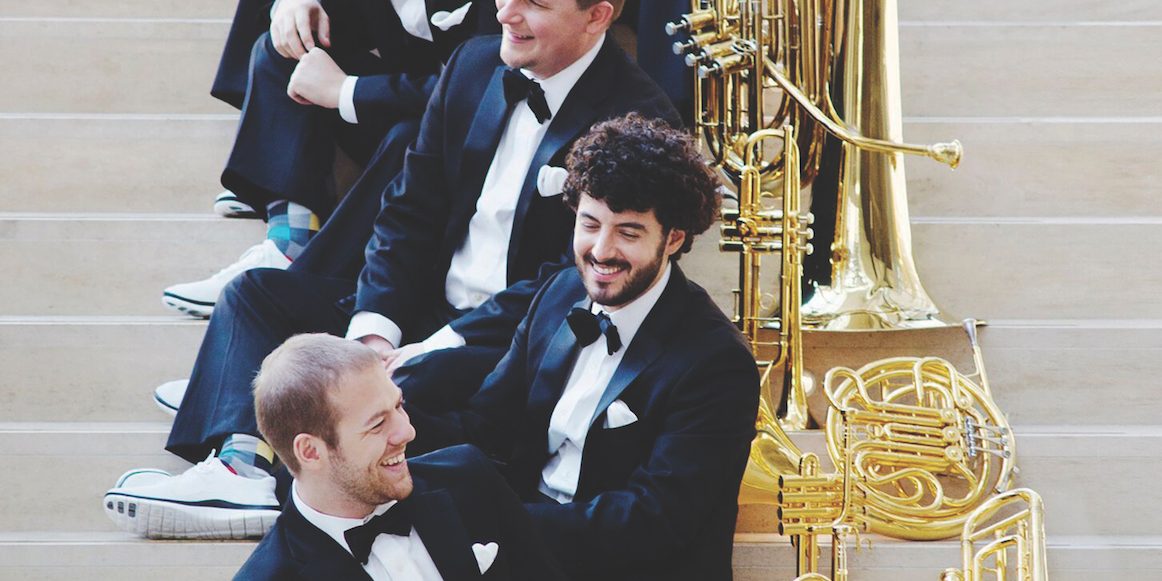 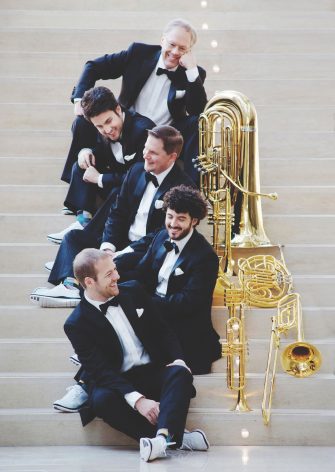 The Eastman Presents Series continues in 2019 on Wednesday, January 30 at 7:30 p.m. in Kodak Hall at Eastman Theatre. One of the most popular brass ensembles today, Canadian Brass, featuring Eastman alumnus Charles (Chuck) Daellenbach (BM66, MA68, PHD71), will team up with the Grammy-nominated Eastman Wind Ensemble, conducted by Mark Scatterday, for a not-to-be-missed performance.  Tickets, starting at just $17 for adults and $10 for ALL students, are available at EastmanTheatre.org

As part of Daellenbach’s return to Eastman, Daellenbach will be honored as the guest lecturer of the 2019 Richard F. Grunow Colloquium for Music Teaching, Learning, and Performance on Tuesday, January 29 at 4 p.m, in Hatch Recital Hall. Established in 2016, this annual colloquium is a cross-disciplinary series featuring presentations and performances by distinguished teachers, researchers, and performers. The series, an intersection of scholarship, musicianship, and music teaching and learning, provides the community opportunities to engage and interact meaningfully and musically. Led by Philip Silvey, chair of Eastman’s Music Teaching and Learning Department, this year’s colloquium will include a Q&A and be followed by a reception in Wegman’s Gallery.

As Professor of Conducting and Ensembles at Eastman, Mark Scatterday recalls how this collaboration and performance came about, sharing, “Chuck Daellenbach was given an honorary doctorate at Eastman. We got to talking about how two of the most famous wind groups in North America should make a recording together – it just made sense – but there was little music composed for wind ensemble and brass quintet. So, we went to work finding composers and arrangers. We were fortunate to have Bramwell Tovey, Jeff Tyzik, and Mike Sweeney write for us, and I also did an arrangement of two of Rayburn Wright’s works. The recording was done in 2007 and was released on Opening Day Records in 2008, titled Manhattan Music.”

“So much of what I get to do every day of my musical life is shaped by the wonderful years I spent at Eastman,” Daellenbach enthuses.  “And playing with the world-famous Eastman Wind Ensemble?  It’s the reason I wanted to study at Eastman in the first place!”

Scatterday adds, “Ten years after the recording, the music is still fresh and rewarding to perform. I’m excited about getting together with the Canadian Brass – it’s always a great collaboration for our students to work at such a high-profile level with arguably the most famous brass quintet in history!”

Tickets for Canadian Brass with Eastman Wind Ensemble performance start at $17 with $10 student tickets available. Tickets can be purchased at the Eastman Theatre Box Office, 433 East Main St.; by phone (585) 274-3000; or online at http://eastmantheatre.org

Masters of concert presentations, Canadian Brass has developed a uniquely engaging stage presence and rapport with audiences. Each of their concerts will show the full range from trademark Baroque and Dixieland tunes to new compositions and arrangements created especially for them – from formal classical presentation to music served up with lively dialogue and theatrical effects. The hallmark of any Canadian Brass performance is entertainment, spontaneity, virtuosity, and, most of all, fun – but never at the expense of the music: Whatever the style, the music is central and performed with utmost dedication, skill and excellence.

With a discography of over 130 albums and an extensive world-wide touring schedule, Canadian Brass is an important pioneer in bringing brass music to mass audiences everywhere, selling well over 2 million albums worldwide, With appearances on The Tonight Show, Today, Entertainment Tonight and more, they have appeared as guest artists on Evening at Pops with John Williams and the Boston Pops, Beverly Sills’ Music Around the World, numerous PBS specials, including a celebrated appearance on Sesame Street, and are frequent guests of many major symphony orchestras.

Education plays a key role in the story of Canadian Brass and each member is uniquely attuned to training the next generation of players. On their travels around the world, they often pause for masterclasses and are more than happy to work with students and young audiences. Canadian Brass is currently Ensemble in Residence at the University of Toronto, after having been Chamber Quintet-in-Residence for many years at the Music Academy of the West in Santa Barbara, California, and has created an innovative brass summer course at the Eastman School of Music. Their support of education is also clearly viewed in their outreach and interaction with El Sistema, the acclaimed global music education program in Venezuela.

The Canadian Brass is represented by IMG Artists in New York.

About The Eastman Wind Ensemble:

The Eastman Wind Ensemble is America’s leading wind ensemble. Its core of about 50 performers includes undergraduate and graduate students of the Eastman School of Music at the University of Rochester.

Frederick Fennell first formulated the general concept of the wind ensemble at Eastman more than 50 years ago. Under his leadership the group became known as the pioneering force in the symphonic wind band movement in the United States and abroad. A. Clyde Roller served as conductor between 1962 and 1964, continuing the tradition established by Fennell. Donald Hunsberger became conductor in 1965 and led the ensemble for 37 years to international prominence. The ensemble’s current director, Mark Davis Scatterday, was introduced as the fourth conductor of this prestigious group during the EWE’s 50th anniversary celebration on February 8, 2002.

The ensemble’s recent recordings include: Manhattan Music with the Canadian Brass, released in 2008 on Opening Day Records with ArchivMusic; a live recording of Roberto Sierra’s music (Summit, 2016); and a new recording of Jeff Tyzik’s music, Images, was released in October of 2018.