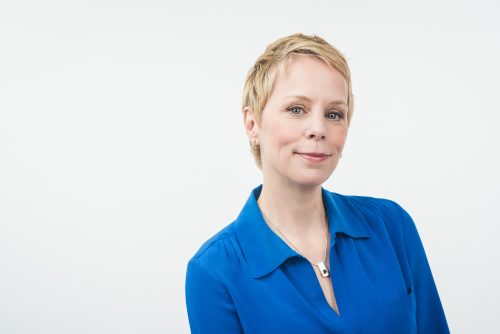 Eastman welcomes leading composer Augusta Read Thomas back to Eastman, where her composition Brio will be performed by the Eastman Philharmonia on Friday, February 1, 7:30 p.m. in Kodak Hall at Eastman Theatre, conducted by Brad Lubman. Thomas will be the guest composer for the Composition Department’s weekly Symposium on Thursday, January 31st, at 3:30 in ESM 209. Observers are welcome to attend.

An associate professor of composition at Eastman from 1993 to 2001, Augusta Read Thomas is a Grammy winner and one of the most recognizable and influential living composers. Her impressive body of works embodies unbridled passion and fierce poetry. The New Yorker called her “a true virtuoso composer.” Championed by such luminaries as Barenboim, Rostropovich, Boulez, Eschenbach, Salonen, Maazel, Ozawa, and Knussen, she rose early to the top of her profession.

Brad Lubman, Associate Professor of Conducting and Ensembles shares, “Augusta Read Thomas has been one of the most important composers, teachers, and festival curators for more than two decades. She has had a major and enormously positive impact on generations of younger composers, and has composed countless dramatic, colorful, and poetic works that have become part of the contemporary repertoire. It will be a great pleasure to welcome her back to the Eastman School of Music, where she was on faculty from the mid-90s into the early 2000s. I have had the pleasure on many occasions to conduct various works of hers, starting back in 1989 at the Tanglewood Music Center. I am eagerly looking forward to conduct one of her most recent works, Brio, with the Eastman Philharmonia on February 1, 2019.”

David Liptak, chair of the composition department at Eastman says, “The composition department is delighted to welcome Augusta Read Thomas back to Eastman. During her visit, she will present her work as our guest for the weekly Composition Symposium, interacting with current composition students. She is robustly active as a composer, teacher, and advocate for new music and the composers who create it. We are extremely excited to have her back at Eastman, where she began her academic career, for this visit.”

The New York Times stated that Thomas had the distinction of having her work performed more frequently in 2013-2014 than any other living ASCAP composer, according to statistics from the performing rights organization. Former Chairperson of the American Music Center, she serves on many boards, is a generous citizen in the profession at large, and, according to the American Academy of Arts and Letters, “has become one of the most recognizable and widely loved figures in American Music.”

Augusta Read Thomas shares, “The ESM is a world-class institution with a very distinguished tradition of developing, performing, and supporting contemporary music.  Exemplary faculty in all areas and disciplines of the school set an inspiring tone and exude a culture of excellence.  I loved (literally loved!) every single day that I was on the faculty and am beyond thrilled to return to campus. I am really looking forward to seeing friends and colleagues, presenting recent works at Colloquium, rehearsing with the Philharmonia conducted by superstar Professor Brad Lubman, and experiencing the concert in beautiful Kodak hall at Eastman Theater.”

The Eastman Philharmonia is made up of third and fourth-year undergraduates and graduate students. The February program also consists of Oliver Knussen’s Flourish with Fireworks,Debussy’s La Mer,and Shostakovich’s Piano Concerto No. 1 with student soloist (to be named shortly). The Knussen piece was added by conductor Brad Lubman after Knussen’s untimely death, as a tribute.