From Sorrow to Joy: An Atmospheric Performance of Orfeo ed Euridice by Eastman Opera Theatre 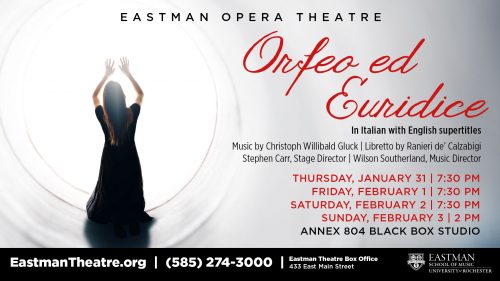 The classic Greek mythological tale of Orpheus, Orfeo ed Euridice, with music by Christoph Willibald Gluck and libretto by Ranieri de’ Calzabigi, will be presented by Eastman Opera Theatre (EOT) January 31, February 1, 2, and 3 in Annex 804 at the Eastman School of Music. Presented in Italian with English supertitles, Orfeo is directed by Stephen Carr, the Associate Artistic Director of Eastman Opera Theatre. Music Director is Wilson Sutherland, Assistant Music Director of EOT.

Perhaps the most popular of Gluck’s works, this influential opera depicts the underground rescue mission in which the hero must control, or conceal, his emotions. Though originally set to an Italian libretto, Orfeo ed Euridice owes much to the genre of 18th-century French opera, particularly in its use of accompanied recitative. Taking place in Eastman’s “black box” venue, the audience is treated to an intimate look at a stunning opera.

“The Orpheus myth is well-known, and Gluck’s setting is one of the most frequently performed operatic settings of the story,” shares Director Stephen Carr.  “At a traditional performance of Orfeo ed Euridice, an audience could expect to see very grand production values, full orchestrations… all the bells and whistles, even a corps-de-ballet. But this production, reimagined for our intimate black box theatre, will be another experience entirely.”

Carr’s production reflects the messages reflected in the original Greek myth, explaining. “It’s a seemingly simple story, but one layered with morals and meaning, so the big challenge for me was choosing a way to distill the piece down. In the end, this production is about seeing and being seen. What does it mean to really look at someone, and what are the repercussions?”

A pre-opera talk will take place 1 hour prior to the performance in A710 in the Eastman Annex.

The performance runs 1 hour, 45 minutes including intermission. There will be no late seating.

Tickets for Orfeo ed Euridiceare $24 General Admission. Tickets can be purchased at the Eastman Theatre Box Office, 433 East Main St.; by phone (585) 274-3000; or online at http://eastmantheatre.org