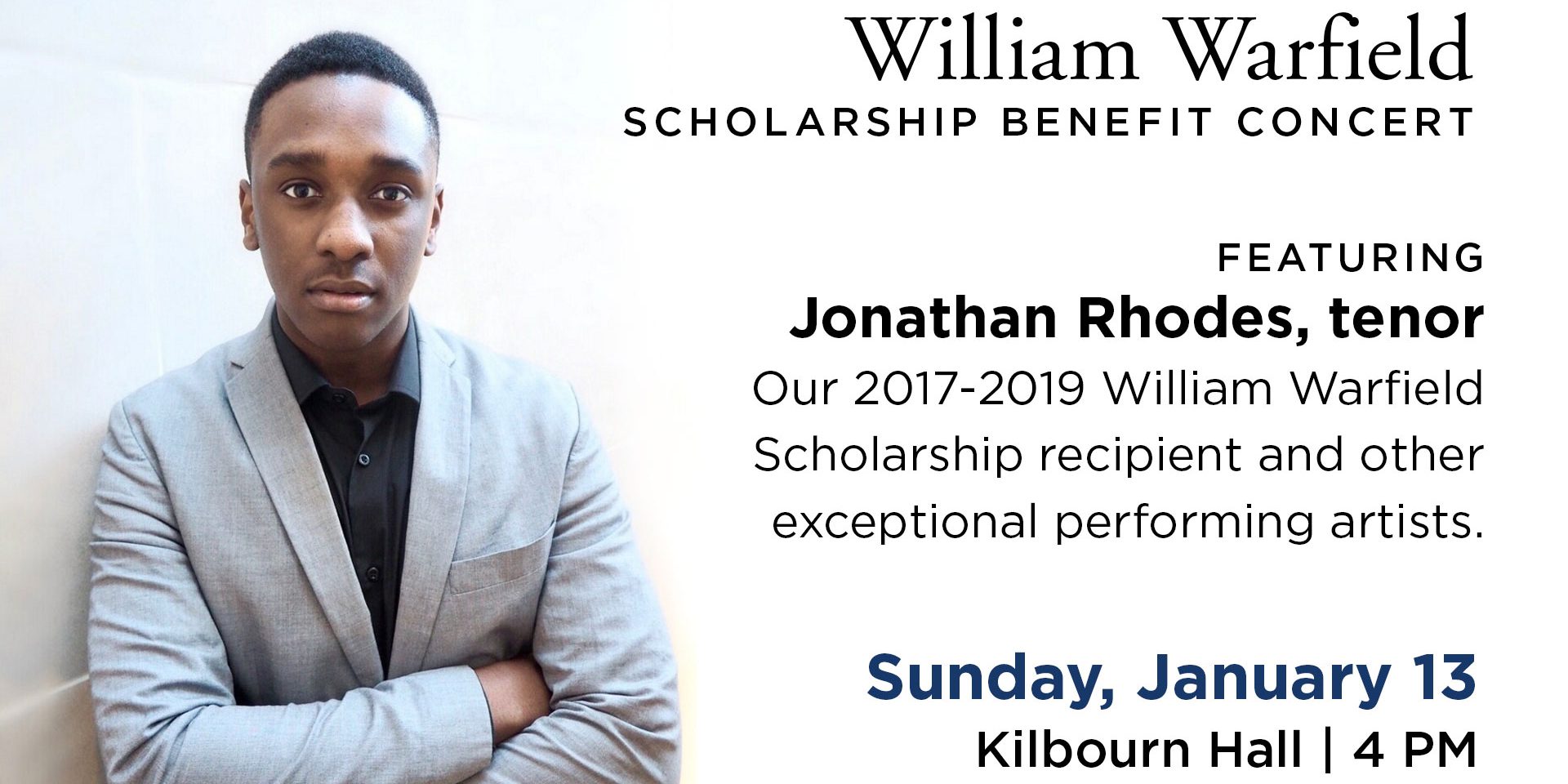 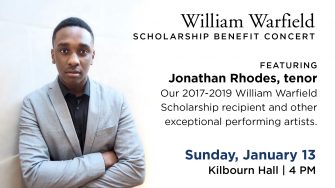 Since it was founded in 1977, the William Warfield Scholarship Fund, Inc. has provided financial aid to more than 35 students at the Eastman School of Music, and spotlighted talented recipients in an annual benefit concert. This year’s benefit concert will be held in the School’s Kilbourn Hall on Sunday, January 13, 2019, at 4 p.m. and features the 2018 scholarship recipient, Eastman School of Music student Jonathan Rhodes.

Over four decades, recipients of the William Warfield Scholarship have included such notable singers as soprano Julia Bullock, winner of the 2014 W. Naumburg Foundation’s International Vocal Competition; soprano Nicole Cabell, winner of the 2005 BBC Cardiff Singer of the World competition; and bass-baritone Jamal Moore, who was featured with the University of Rochester a cappella ensemble The Yellowjackets on the NBC competition The Sing-Off in 2011 and is performing internationally with the a cappella group The Exchange.

Jonathan Rhodes is a third-year vocalist attending the Eastman School of Music, studying under Professor Anthony Dean Griffey. Originally from Orlando, Florida, Jonathan made his performance debut with the Minnesota Opera’s youth program, in one of the principal roles (Kurz) in Memory Boy. Jonathan’s ensemble work has included performances with the Eastman Chorale, the Bach Festival Society, and a temporary choir member position in Hans Zimmer’s 2017 live tour. Jonathan is also the recipient of the Freshman Vocal Jury award from the Eastman Voice and Opera Department. Jonathan played the role of Liberto in the Eastman Opera Theatre’s production of Monteverdi’s L’Incoronazione di Poppea. Outside of music, Jonathan is pursuing a second degree in Political Science through the University of Rochester. Scholarship recipients are nominated by Eastman faculty based on criteria of demonstrated ability and financial need. Warfield laureates have gone on to achieve high distinction as performers and educators, and many sustain their deep connection to Rochester through performances with the Rochester Philharmonic Orchestra, the Rochester Oratorio Society, and other professional ensembles.

William Warfield was known worldwide for his work as a soloist, recitalist, actor, and narrator. Born in Arkansas, he moved to Rochester with his family as a young boy and attended Rochester city schools. During his senior year, he won the National Music Educators League Competition and a full scholarship to any American music school of his choice. Warfield chose the Eastman School of Music, where he received his bachelor’s and master’s degrees in 1942 and 1946, respectively. He is best known for his portrayals of Porgy in Gershwin’s Porgy and Bess and of Joe, the dock hand, in the movie Show Boat. In 1984, Warfield won a Grammy Award for his narration of Aaron Copland’s A Lincoln Portrait accompanied by the Eastman Philharmonia. He remained connected to this community until his death in 2002. His family still lives in the Rochester area.