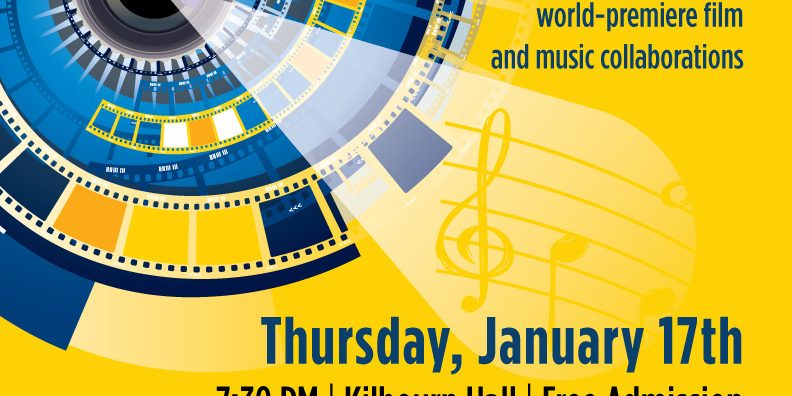 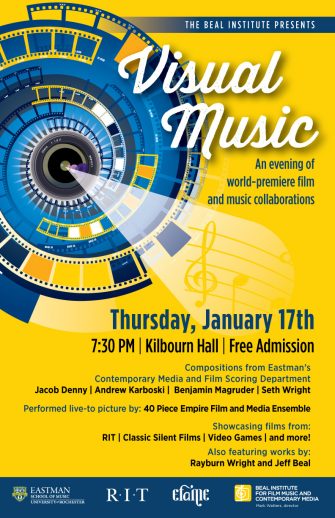 The Beal Institute, under the direction of Associate Professor Mark Watters, presents “Visual Music: An Evening of World-Premiere Film and Music Collaborations,” Thursday, January 17 at 7:30 p.m. in Kilbourn Hall at the Eastman School of Music.

The evening’s compositions represent visual music, showcasing films from Rochester Institute for Technology (RIT) student filmmakers, classic silent films, video games, and more.  Also on the program will be music by the namesake of the Beal Institute, Jeff Beal (BM85) and Ray Wright, who served as the Professor of Jazz Studies and Contemporary Media at Eastman from 1970 to 1990 and also served as co-chair of the Conducting and Ensembles Department.

“We are very excited to be presenting Visual Music, the first departmental recital from the newly created Contemporary Media and Film Scoring curriculum at the Eastman School of Music. Sponsored by the Beal Institute, the program will showcase the unique talents of our graduating Master’s students,” shared Mark Watters, an Emmy Award-winning conductor and composer and director of the Beal Institute.

Stephanie Maxwell, Professor of Film and Animation at RIT, was integral in collaborating with Watters for the showcase and this evening of visual music. Several RIT student films will be shown alongside their composition counterparts, including work from Monica Nguyen, Nate Sorrentino, and Sabrina Valdez.

Maxwell states, “The Beal Institute represents a core of talent, professionalism and creativity of Eastman composers, who, together with our RIT film and media artists, collaborate in real working relationships, using original material, that give all artists vital, first-hand experience in their art forms and thereby make them better at what they aspire to do after graduating. This recital is a celebration of art and creativity, and the success of the unique artistic relationship RIT and Eastman have engaged in for over 25 years.”

The Visual Music performance is free and open to the public.

Students in the Beal Institute have opportunities to work with established visiting artists: professional musicians who are actively engaged in writing for film and other contemporary media. Students are also encouraged to collaborate on cross-disciplinary and multi-media projects with other students, faculty members from humanities, composition, and other Eastman departments, community arts organizations, and other area universities. The Institute enhances the graduate degree program in convergent media and film music.