“The King is Dancing” at the Memorial Art Gallery 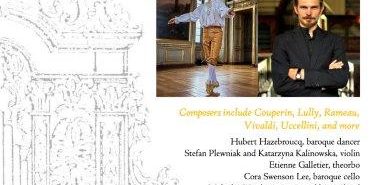 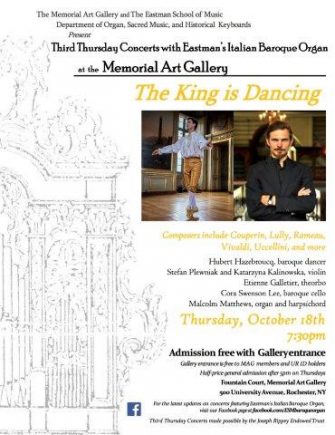 The new season of the Third Thursday concert series with Eastman’s Italian Baroque Organ features an exciting program performed by members of European ensemble Il Giardino d’Amore, directed by Stefan Plewniak. Joined by early dance specialist Hubert Hazebroucq, Il Giardino d’Amore will present a program dedicated to French and Italian music during the time of King Louis XIV. Featuring Eastman’s Italian Baroque Organ at the Memorial Art Gallery, “The King is Dancing” will include solo and collaborative performances by Hazebroucq, Il Giardino d’Amore, and students from the Eastman School of Music. The concert will take place Thursday, October 18, at 7:30pm in the Memorial Art Gallery Fountain Court.

The Third Thursday concert series provides musicians and music-lovers the opportunity to experience authentic Baroque music on a regular basis. This month’s concert will include works by Couperin, Lully, Rameau, Uccellini, and Vivaldi. Baroque dance master Hubert Hazebroucq will demonstrate the artful relationship between Baroque dance and music. Guest musicians will include Stefan Plewniak and Katarzyna Kalinowska (baroque violin), and Etienne Galletier (theorbo). They will be joined by doctoral students Cora Swenson Lee (baroque cello) and Malcolm Matthews (organ and harpsichord) from the Eastman School of Music.

Eastman’s Italian Baroque Organ was built around 1770 in central Italy. Restored and installed in 2005 at the Memorial Art Gallery, the instrument is the only one of its kind in North America. The organ’s beautiful, authentic sounds have been heard by thousands of visitors who attend weekly Sunday mini-recitals and special “Third Thursday” concerts by internationally celebrated guest artists and Eastman musicians.

Admission to the concert is included with Gallery admission, which is half-price on Thursday evenings and free to University of Rochester student ID holders. Seating for the concert is limited and will be available on a first-come, first-serve basis.

This concert is made possible by the Rippey Endowed Trust.

The next Third Thursday concert is entitled “Organ and Opera” and will take place on November 15, 2018. It will feature vocalists and organists from the Eastman School of Music in a program showcasing the close relationship between organ music and opera in 19th-century Italy.

“The King is Dancing”