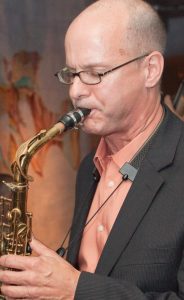 With 7 CDs to his credit, Charles Pillow has established himself as one of the premier woodwind multi-instrumentalists and saxophonists of the day. After completing his undergraduate work at Loyola University, Pillow pursued his Master’s Degree in Jazz Studies at Eastman. AllAboutJazz.com enthused, “Pillow is on the cutting edge of a trend. He ushers in a previously unexploited way to enliven and extend jazz.”

A fluent performer, educator, and touring musician, Pillow’s career has taken him around the globe to Japan, Finland, Portugal, Brazil, Germany, France, Holland, Italy, Sweden, Canada, and all over the United States. Working with legendary producers Phil Ramone and Arif Mardin, he has performed with top artists and ensembles, including Christina Aguilera, Marc Anthony, Wynonna Judd, Blood, Sweat & Tears, Michael Jackson, Randy Brecker, David Liebman, The Orpheus Chamber Ensemble, The Long Island Philharmonic, and The New Orleans Symphony. In addition to his teaching at Eastman, he gives clinics and master classes throughout the United States and has appeared at many European and American jazz festivals. His publications include The Art of Double: A Saxophonists Guide to Flute, Clarinet and Oboe, Jazz Etudes on Great American Standards for Flute and Clarinet, and Jazz Oboe Method and Play Along.

About 900 students are enrolled in Eastman’s Collegiate Division—about 500 undergraduate and 400 graduate students. Students come from almost every state, and approximately 20 percent are from other countries. They are guided by more than 95 full-time faculty members. Six alumni and three faculty members have been awarded the Pulitzer Prize for Music, as have numerous GRAMMY® Awards. Each year, Eastman’s students, faculty members, and guest artists present over 800 concerts to the Rochester community.