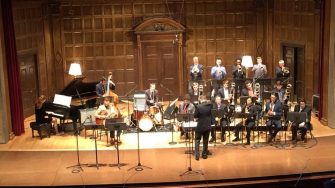 Eastman Jazz Workshop Ensemble presents: A Benny Carter Retrospective Friday, November 9, at 7:30 p.m. in Kilbourn Hall at the Eastman School of Music. Conducted by director Chase Ellison (MM ‘16), the concert’s music is solely compositions of Carter’s including: Jackson County Jubilee, Remember, Easy Money, Amoroso, Sunset Glow, and others. It also includes a few jazz standards that Carter arranged, such as It Don’t Mean a Thing If It Ain’t Got That Swing and In a Mellow Tone.

Benny “King” Carter (1907-2003), a world-class saxophonist and arranger, was not only well-regarded within the field of jazz, he also had ties to Eastman. He performed here in 1996 and many professors and students praised his skills, music, and incredible work ethic. While perhaps not as well known to a general audience, he was an incredibly influential figure in jazz, recording with individuals like Count Basie, Zoot Sims, and even Ella Fitzgerald, who said, “He’s everything a musician would want to be.”

Ellison, conductor of the Jazz Workshop Ensemble, picked Carter’s music as the theme of this concert, saying, “Benny Carter is a composer/arranger that might be overlooked, but he adds a very important element in the history of the music. Our students are benefitting greatly from learning his music, and we hope audiences will, too.”

Created by the Jazz and Contemporary music faculty to respond to an increase in students and to the need for another jazz ensemble at Eastman, the Eastman Jazz Workshop Ensemble is in its third year, the second under Ellison’s direction.