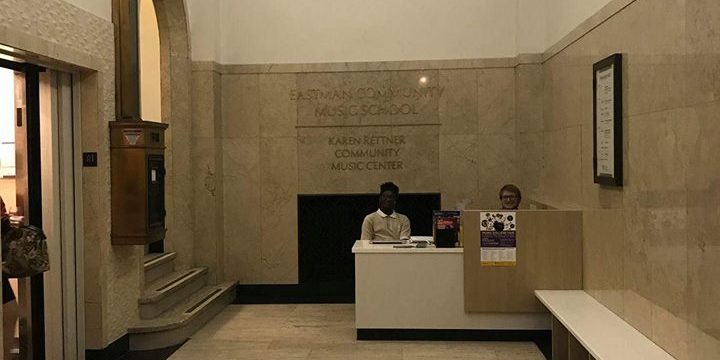 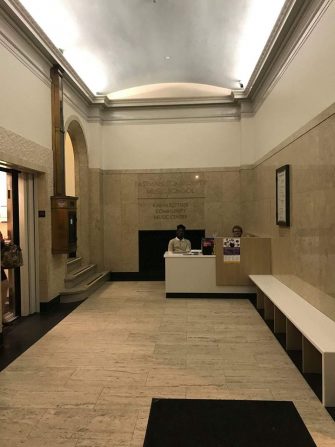 The Eastman Community Music School (ECMS) has been an integral part of the Eastman School of Music, University of Rochester, and the Rochester community, since its opening in 1921. Housed on Gibbs Street in Messinger Hall, the Eastman Community Music School’s $2.8 million renovation was made possible by generous contributions from Karen and Ron Rettner, The Kenlou Foundation, The Williams Family, Nancie Kennedy ‘79E (MM), The Spindler Family Foundation, and members of the ECMS Community, as well as a grant from New York State thanks to support from Governor Andrew Cuomo, the New York State Legislature, and the Finger Lakes Regional Economic Development Council (FLREDC).

“The entire ECMS Community – students, families, faculty and staff, have followed this project with anticipation for months and we are delighted to start the new school year in this fantastic facility,” says Petar Kodzas, Associate Dean of the Eastman Community Music School. “It is very symbolic that such a wide community of supporters came together to make this project possible and we look forward to expanding our role in the musical life of Rochester.”

Eastman School of Music National Council Member Karen Rettner and her husband, University of Rochester Trustee Ronald Rettner, are the primary contributors to the building renovation.  Ron has also provided his extensive expertise in commercial construction and property development to guide the project.  “Our commitment to Eastman and this project stems from our love of music, the impact of and high level of community engagement and excellence at the Eastman Community Music School,” share the Rettners.  “We are proud to foster music education and to enrich the lives of community members of all ages by affording them the opportunity to gain an appreciation of music.”

“The sentiment inscribed on the façade of the Eastman Theatre, ‘erected for the enrichment of community life,’ is completely woven into the fabric of the Eastman School of Music,” says Jamal J. Rossi, Joan and Martin Messinger Dean of the Eastman School of Music.  “The Eastman Community Music School has been one of most impactful elements of our service to the community for almost 100 years.  For the first time, we now have a facility that provides beautiful teaching and learning spaces that match the excellence of the faculty and students who make music together.  We are deeply grateful to the visionaries and donors who purchased this building fifteen years ago, and to those who provided the resources to transform this building into something very special.”

Gibson gives background to the project coming to fruition, sharing, “The Eastman Community Music School renovation project’s conceptual design was initiated in early 2015. A technical and complex endeavor, we knew the project had to include studio layouts that would be conducive to community school-based instruction, as well as ensuring the highest standard of requirements for acoustics, humidity controls, and ergonomics.”

Senator Joe Robach, 56th District, states, “The Eastman School of Music is an iconic institution, not just in Rochester, but nationwide. These renovations will benefit the students, faculty and staff of the Eastman School, and will add to its exceptional reputation that has been built over the last 97 years. I was pleased to support this state-of-the-art renovation project and the funding it received from the Finger Lakes Regional Economic Development Council.”

Additional photos of the completed renovation spaces, as well as highlights from the dedication and celebration, are available, as are Dean Rossi and Associate Dean Kodzas.

The Eastman Community Music School (ECMS) provides opportunities for community members to learn, discuss, and celebrate music. As one of Eastman’s primary connections to the greater Rochester community since 1921, the school offers music lessons, ensembles, classes, and workshops to student of all ages and backgrounds. ECMS serves an average of 1,600 students per year ranging in age from 4 months to 92 years old. From pre-school and early childhood programs, to college prep and diploma programs, to adult ensembles and classes, ECMS nurtures and inspires students at all levels. The renovations enable the school to accommodate growing enrollment numbers.