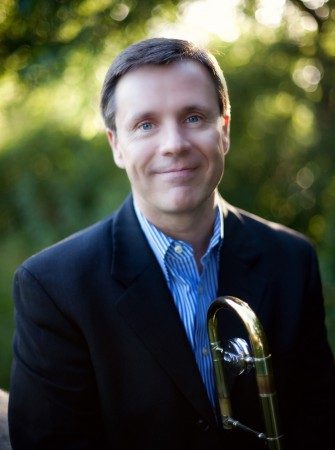 A faculty member at the Eastman School of Music since 1991, Mark Kellogg is also Coordinator of the Brass Chamber Music Program, an Affiliate Faculty Member in Jazz Studies and Contemporary Media, and Affiliate in Music Teaching and Learning. An active performer, Mr. Kellogg also holds the position of Principal Trombone of the Rochester Philharmonic Orchestra. Throughout his career he has embraced a wide variety of performing roles, from jazz soloist to chamber musician to orchestral performer.

Receiving his undergraduate training and Performer’s Certificate from the Eastman School, Mr. Kellogg has enjoyed a long association as a soloist with the Eastman Wind Ensemble, performing the trombone and euphonium works of Grondahl, Nelhybel, Berlioz, and Tyzik in the Eastman Theatre, as well as on the Ensemble’s tours to Carnegie Hall and Japan. He was a founding member of the brass and percussion ensemble Rhythm and Brass, touring the United States and Japan, and recording four CDs during his two years in the group. Mr. Kellogg has also released a jazz recording with Eastman faculty colleague pianist Tony Caramia, Upstate Standards, which celebrates the music of upstate New York composers Harold Arlen, Alec Wilder, and Jimmy Van Heusen.

Priscilla Yuen is currently working at the Eastman School of Music as staff pianist and at the Rochester Institute of Technology as adjunct professor of piano and choral accompanist. Ms. Yuen collaborates with musicians across the country, participates and accompanies in master classes, coaches musicians of all ages, and enjoys choral accompanying. Most currently she was the staff pianist and arts/administrative coordinator at the New York Summer Music Festival and has also participated in the Quartet Program hosted by Charles Castleman. Ms. Yuen received her Master of Music degree from the Eastman School of Music in Piano Accompanying & Chamber Music, and received her Bachelor of Music degree from the University of Missouri-Columbia in Piano Performance.

Professor of Music Education at the Eastman School of Music, Christopher Azzara is also an Affiliate Faculty Member in Jazz Studies and Contemporary Media. Pianist, arranger, author, and educator, Azzara has made important contributions to advancing the understanding of creativity and improvisation in the music learning process. An active teacher and clinician, he has taught and performed extensively throughout the United States, and in Canada, the Caribbean, France, Germany, Italy, Lithuania, Poland, Portugal, China, Japan, and Australia. After earning his Bachelor of Music degree from George Mason University, he later received a Master of Music and a Ph.D. in Music Education from the Eastman School of Music.

Dan Ziemann, Jazz Bass Instructor at the Eastman Community Music School, is a graduate of the Eastman School of Music who, in addition to touring throughout the United States and Canada, is a New York State freelancer. A jazz bassist, educator, and composer, Ziemann can be seen performing at the Rochester International Jazz Festival and a number of Rochester and Buffalo’s local venues. In addition to performing, Ziemann is extremely passionate about education and the learning process. He taught at the Tritone Jazz Fantasy Camp, as well as Buffalo State College’s youth jazz program. Along with his position at ECMS, Ziemann is on the faculty at SUNY Oswego and is a New York State certified music teacher.

About 900 students are enrolled in Eastman’s Collegiate Division– about 500 undergraduate and 400 graduate students. Students come from almost every state, and approximately 20 percent are from other countries. They are guided by more than 95 full-time faculty members. Six alumni and three faculty members have been awarded the Pulitzer Prize for Music, as have numerous GRAMMY Awards. Each year, Eastman’s students, faculty members, and guest artists present more than 800 concerts to the Rochester community.