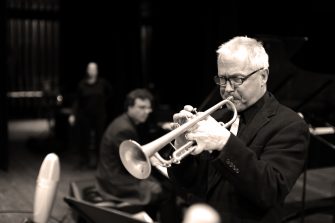 Clay Jenkins’ career as a jazz artist has covered a wide range of musical experiences and responsibilities, bringing him to the forefront of the jazz performing and teaching arenas. Also Collegiate Instructor in Trumpet at the Eastman Community Music School, Jenkins’ experience as a performer began at an early age playing with the Stan Kenton Orchestra. After recording three live albums with the Kenton Band, he moved to Los Angeles in 1978, where he was in demand as both a live performer and studio-recording musician, studying with the renowned trumpet teacher James Stamp. From Los Angeles, he toured with the big bands of Harry James, Buddy Rich, and finally, the Count Basie Orchestra.

Since joining the Eastman faculty in 2000, Jenkins has maintained a busy performing, recording, and teaching schedule. Remaining active throughout the United States (especially in NYC and LA) and abroad, Jenkins continues to perform and record with the Clayton/Hamilton Jazz Orchestra, of which he is a charter member (the trumpet section has included trumpet artists Snooky Young, Bobby Bryant, Chuck Findley, Oscar Brashear, Byron Stripling, and Bijon Watson).

Jenkins’ solo recordings include Rings, Give and Gather, Yellow Flowers After, Azure Eyes, and Matters of Time. Additionally, his ensemble with co-leader Kim Richmond has released three recordings: Range, Look at the Time, and Crossweave. Professor Jenkins also has recorded with his Eastman colleagues Jeff Campbell and Rich Thompson on their Trio East recording. His most recent recording project is Blues State. Attending the University of North Texas (then named North Texas State University), Jenkins earned his bachelor’s degree in music theory, and received his master’s degree in jazz studies from the University of Southern California.

About 900 students are enrolled in Eastman’s Collegiate Division– about 500 undergraduate and 400 graduate students. Students come from almost every state, and approximately 20 percent are from other countries. They are guided by more than 95 full-time faculty members. Six alumni and three faculty members have been awarded the Pulitzer Prize for Music, as have numerous GRAMMY® Awards. Each year, Eastman’s students, faculty members, and guest artists present more than 800 concerts to the Rochester community.