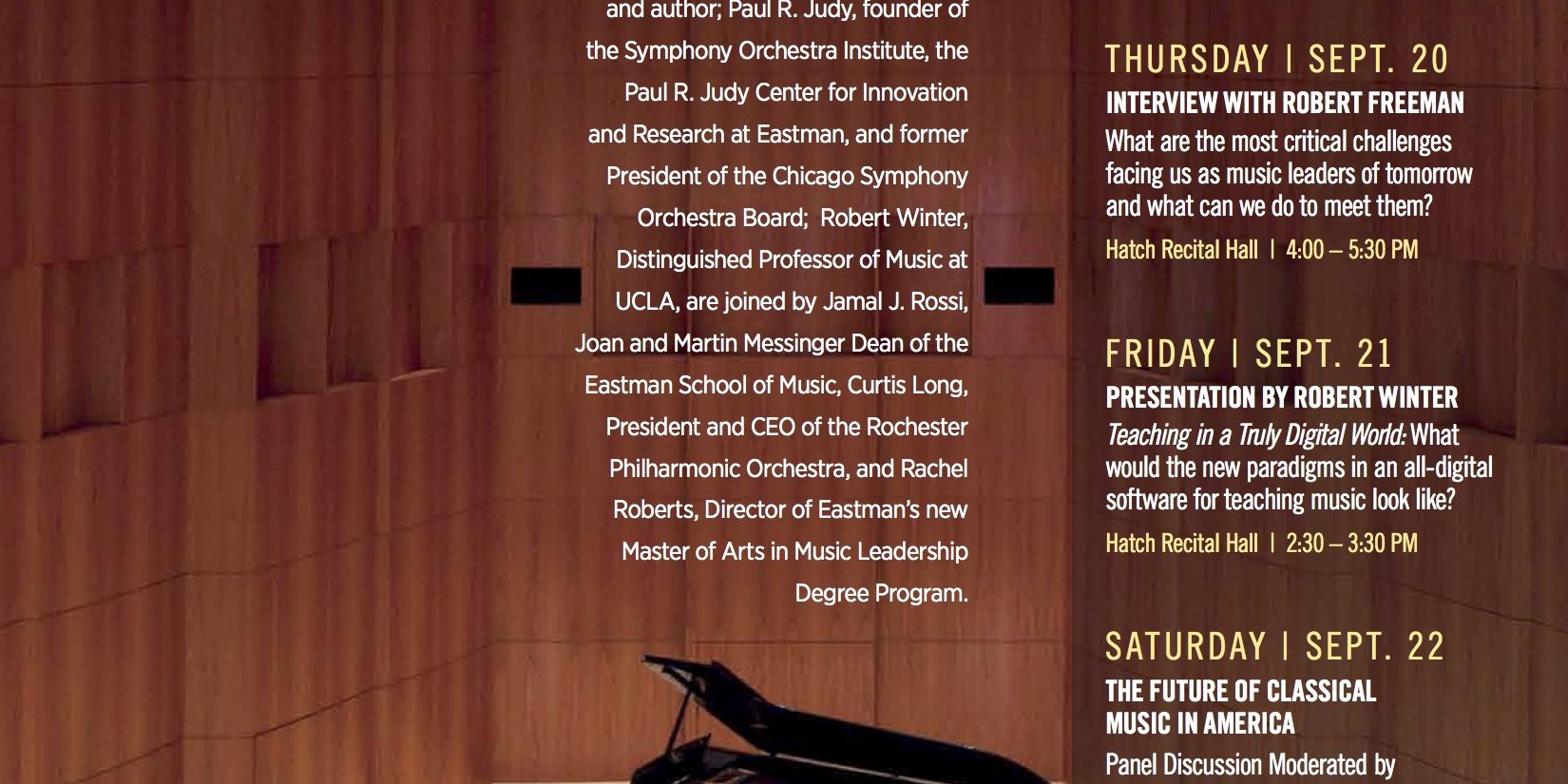 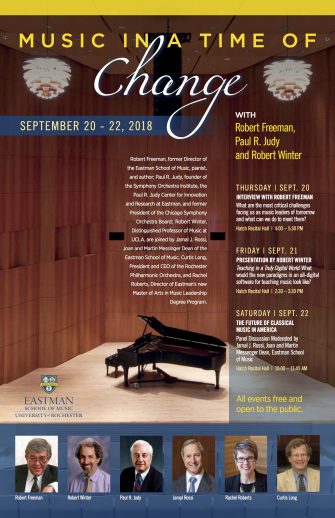 Former Eastman School of Music director Robert Freeman, musicologist Robert Winter, and Paul R. Judy, the founder of Eastman’s Paul R. Judy Center for Innovation and Research, will be visiting Eastman September 20 through 22, presenting three public lectures and panels for the Eastman and Rochester community. Topics to be discussed include: The Future of Classical Music in America; Teaching in a Truly Digital Age; and Critical Challenges Facing Musical Leaders of Tomorrow.

All three are scholars and visionaries in their field, and together with several Eastman faculty members will lead a three-day experience hosted by Eastman’s Institute for Music Leadership. Jim Doser, Director of the Institute for Music Leadership, comments, “These three leaders continue to inspire cutting edge thinking and create substantive and lasting changes in the field of music and music education. This is an exceptional opportunity for our community to interact with them.”

Joining this group for the panel discussion on Saturday will be Curtis Long, CEO and President of the Rochester Philharmonic Orchestra; Rachel Roberts, Director of Eastman’s Master of Arts in Music Leadership Degree Program; and Jamal J. Rossi, Joan and Martin Messenger Dean of the Eastman School of Music.

Robert Freeman has led several of America’s finest music schools – including the Eastman School of Music, where he served as director for more than two decades. From 1996 through 1999, Freeman served as president of the New England Conservatory, then as dean of the College of Fine Arts at The University of Texas at Austin until 2006. A Steinway artist, Freeman has performed in concerts and recitals throughout North America and Europe, and has made several recordings, mainly with colleagues from Eastman and the University of Texas. As a musicologist, his publications have focused on 18th-century music history and on the history and future of musical education. His most recent book is The Crisis of Classical Music In America (Rowman and Littlefield, 2014).

Musicologist and author Robert Winter is Distinguished Professor of Music at UCLA and creator of the digital learning resource Music In The Air.

Interview and conversation with Robert Freeman: “What are the most critical challenges facing us as the musical leaders of tomorrow and what can we do to meet them?”

Presentation and Q&A session with Robert Winter: “Teaching in a Truly Digital Age”

“The Future of Classical Music in America”

All three events are free and open to the public.

Always at the forefront of educating musicians of the future, the Eastman School is dedicated to the comprehensive education of world-class musicians, scholars and leaders. With a particular focus on the changing state of classical music, with generous support from the Andrew W. Mellon Foundation, the Institute for Music Leadership was the first center of its kind in the country, created in 2001. It serves as a center – and benchmark – for music leadership programs and activities and respond to and help shape America’s changing musical and cultural environment.

For more information about the Institute for Music Leadership and the Paul R Judy Center for Innovation and Research please visit https://iml.esm.rochester.edu/