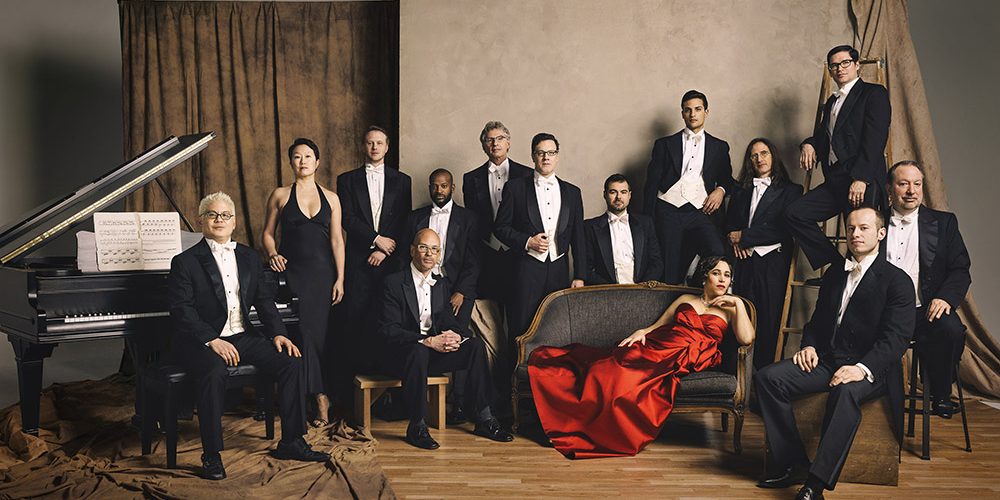 The Eastman Presents Series kicks off the 2018-19 season Friday, October 5 at 8 p.m., in Kodak Hall at Eastman Theatre. Featuring front man Thomas Lauderdale, piano; singer China Forbes and a dozen musicians, the group’s talent kicks off Eastman Presents season, and is also the featured event for The University of Rochester’s Meliora weekend.

Pink Martini performs its multilingual repertoire in over 25 languages on concert stages and with symphony orchestras throughout Europe, Asia, Greece, Turkey, the Middle East, Northern Africa, Australia, New Zealand, South America and North America. “Pink Martini is a rollicking around-the-world musical adventure. If the United Nations had a house band in 1962, hopefully we’d be that band,” shares Thomas Lauderdale, Bandleader/Pianist for the group.

“Our 18/19 season offers something for everyone.  From one of America’s greatest violinists, to a quintet that has put brass music on the map.  From a symphonic celebration of groundbreaking cartoons, to a sensational showcase for Cuba’s most prodigious musicians.  From distinguished vocalists, to wild rhythms steeped in gypsy roots, to sublime keyboard artistry, and musical journeys to far-away lands.”

Pink Martini made its European debut at the Cannes Film Festival in 1997 and its orchestral debut with the Oregon Symphony in 1998 under the direction of Norman Leyden. Since then, the band has gone on to play with more than 70 orchestras around the world, including multiple engagements with the Los Angeles Philharmonic at the Hollywood Bowl, the Boston Pops, the National Symphony at the Kennedy Center, the San Francisco Symphony, the Cleveland Orchestra, the Sydney Symphony at the Sydney Opera House, and the BBC Concert Orchestra at Royal Albert Hall in London.

Featured singer China Forbes has performed songs in over twenty languages and has sung duets with Michael Feinstein, Jimmy Scott, Georges Moustaki, Henri Salvador, Saori Yuki, Faith Prince, Carol Channing, and Rufus Wainwright, among others. She has performed in venues from Carnegie Hall to Red Rocks, the Hollywood Bowl to the Grand Rex in Paris. She released her second solo album ’78 on Heinz Records in 2008, a collection of autobiographical folk-rock songs.

This concert is sponsored by M/E Engineering.

Tickets for Pink Martini performance start at $26 with $10 student tickets available. Tickets can be purchased at the Eastman Theatre Box Office, 433 East Main St.; by phone (585) 274-3000; or online at http://eastmantheatre.org