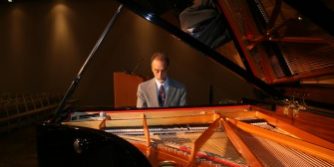 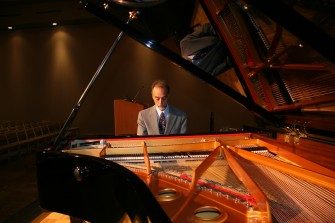 The Faculty Artist Series presents Tony Caramia, Professor of Piano, at Eastman, Sunday, September 30, at 3:00 p.m. in Kilbourn Hall. Caramia is also Director of Piano Pedagogy Studies, Coordinator of the Class Piano Program, and an Affiliate Faculty of Jazz Studies and Contemporary Media at Eastman. The concert, with guest artists and Eastman faculty members Bob Sneider, Mike Kaupa, Rich Thompson, and Jeff Campbell, is titled, “A European Travelogue.” It will feature jazz compositions by European composers including Martinu, Vladigerov, Schulhoff, Zawinul, and Shearing, as well as contemporary women jazz pianists.

Tony Caramia is Professor of Piano at the Eastman School of Music, where he is Director of Piano Pedagogy Studies and Coordinator of the Class Piano Program.  In May 2003, he was a guest on Marian McPartland’s Piano Jazz on NPR.  Her 1927 Steinway is now housed in his Eastman studio.  In September of 2007, he was privileged to perform in the dedication concert on the new “Sorel” Steinway at SUNY Fredonia, in honor of his former teacher, Miss Claudette Sorel. He received the 2010 Outstanding Achievement Award from SUNY Fredonia.

He has conducted numerous workshops in jazz piano for teachers at MTNA National and State Conventions; the International Association for Jazz Educators (IAJE) Teacher Training Institutes; the National Piano Teachers Institute, and the International Workshops. He has lectured and performed at the European Piano Teachers Association International Conference in London, the Australian Piano Pedagogy Conference in Adelaide, and the Institute of Registered Music Teachers National Conference in New Zealand.  In November 2014, he was invited to perform and lecture at the Meetings on Piano Pedagogy, at the Federal University of Santa Maria, Brazil. In June 2016, he was a guest artist and teacher at the Dakota Sky International Piano Festival.

Mr. Caramia was a featured performer at the prestigious Rochester International Jazz Festival, recent National Conferences on Keyboard Pedagogy, and the 50th Anniversary of the New School for Music Study, in Princeton, NJ.  A strong advocate of theme recitals, he has presented multi-media tributes to composers George Gershwin, Billy Mayerl, Harold Arlen, Richard Rodgers, and Dana Suesse—The Girl Gershwin.  In 2015 he honored the Centennial year of the extraordinary pianist, Cy Walter.  In 2017 his students celebrated the 100th Anniversary Year of Women’s Right to Vote in New York State by performing music by women composers from 1917-2017— including world premieres of compositions by Ching-Shan Chang and Jon Lin Chua—at the Hochstein School of Music & Dance.

Jeff Campbell, Professor of Jazz Studies and Contemporary Media, has carved out an impressive career as bass player of extraordinary artistry, fluent in both the jazz and classical idioms. He is a member of the Rochester Philharmonic Orchestra bass section and his summers are occupied with the Birch Creek Music Performance Center in Door County, Wisconsin, where he serves as program director, and the Eastman Summer Jazz Studies and Bass Day, of which he is co-director.

Trumpeter Mike Kaupa has performed throughout the U.S., Europe, and Japan.  He was an interim professor of jazz trumpet at the Eastman School for the 1999/2000 school year and the spring semester, 2010. Among others, he has performed with Jorge Rossy, Ben Monder, Mark Murphy, Gary Bartz, Luciana Souza, Joe Locke, Mel Torme, and Ray Charles. Mike holds a Bachelor of Music degree from Fredonia State University and a Master of Music degree from The University of Miami. He is currently on the faculty of The Harley School, Finger Lakes Community College, Eastman Community Music School and the IfCM Collective.

Rich Thompson is an Associate Professor of Jazz Studies and Contemporary Media at the Eastman School of Music. In addition to his duties as artist/teacher of drum set, he also directs the Eastman Jazz Lab Band, teaches fundamentals of jazz drum set, assists in coaching the rhythm sections of small groups and big bands, and is a member of the Eastman Jazz Trio/Quartet with Harold Danko, Clay Jenkins and Jeff Campbell.

Tickets for Eastman’s Faculty Artist Series are $10 for the general public, University of Rochester ID holders, and free to current Season Subscribers. Tickets can be purchased at the Eastman Theatre Box Office, 433 East Main St.; by phone (585) 274-3000; or online at http://eastmantheatre.org

About 900 students are enrolled in Eastman’s Collegiate Division– about 500 undergraduate and 400 graduate students. Students come from almost every state, and approximately 20 percent are from other countries. They are guided by more than 95 full-time faculty members. Six alumni and three faculty members have been awarded the Pulitzer Prize for Music, as have numerous GRAMMY® Award winners Each year, Eastman’s students, faculty members, and guest artists present more than 800 concerts to the Rochester community.