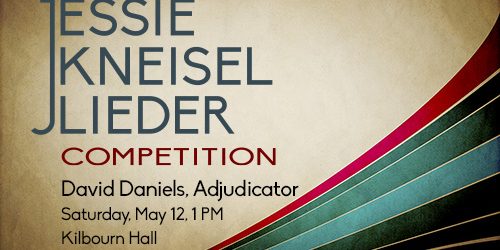 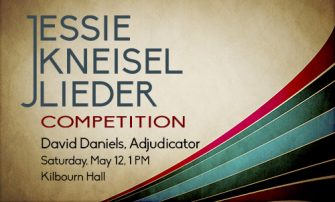 The annual competition, which highlights the German art songs that figure prominently in vocal recitals at Eastman, was started by alumnus George McWhorter (BM ’57) to honor Jessie Kneisel. Dr. Kneisel taught courses in German, German diction, and German libretti for 45 years beginning in 1931. She also served as Dean of Women. The Jessie Kneisel Prizes in German Lieder are given each year to outstanding singers and collaborative pianists.

Each Eastman singer/pianist team will present a 20-minute program in the order listed above. Winners will be announced after the completion of the competition. First, second, and third places are given separately to singers and pianists. The first-place pianist receives an award in memory of Ann Clark Fehn, given by Udo Fehn and Margaret V. Clark. The singer awarded first prize will present a Winner’s Concert with his or her pianist at 8 p.m. on Saturday, May 19, in Kilbourn Hall.

David Daniels is known for his superlative artistry, magnetic stage presence, and a voice of singular warmth and surpassing beauty, which have helped him redefine his voice category for the modern public. The American countertenor has appeared with the world’s major opera companies and on its main concert and recital stages. He made history as the first countertenor to give a solo recital in the main auditorium of Carnegie Hall. The Chicago Tribune has called Daniels “today’s gold standard among countertenors.”

Highly sought after for the works of Handel, Monteverdi, Gluck, Mozart, and Britten, David Daniels has been featured on the great operatic stages of the world to overwhelming critical acclaim. Gramophone magazine acknowledged his contribution to recorded excellence as well as his expansion of the repertoire for his voice type by naming him one of the “Top Ten Trailblazers” in classical music today. Daniels is Professor of Music at the University of Michigan.

About 900 students are enrolled in Eastman’s Collegiate Division—about 500 undergraduate and 400 graduate students. Students come from almost every state, and approximately 20 percent are from other countries. They are guided by more than 95 full-time faculty members. Six alumni and three faculty members have been awarded the Pulitzer Prize for Music, as have numerous GRAMMY Awards. Each year, Eastman’s students, faculty members, and guest artists present more than 700 concerts to the Rochester community.