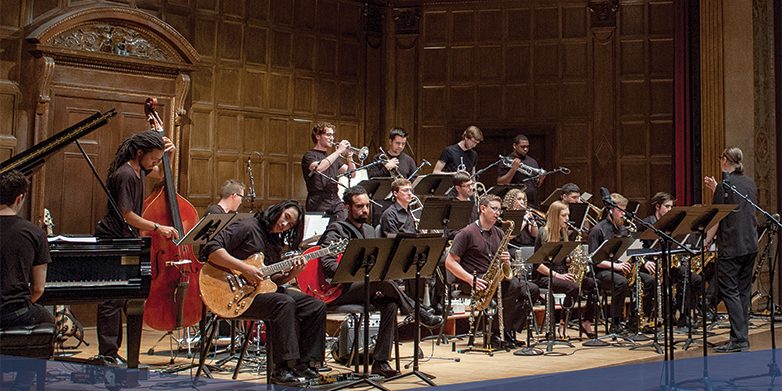 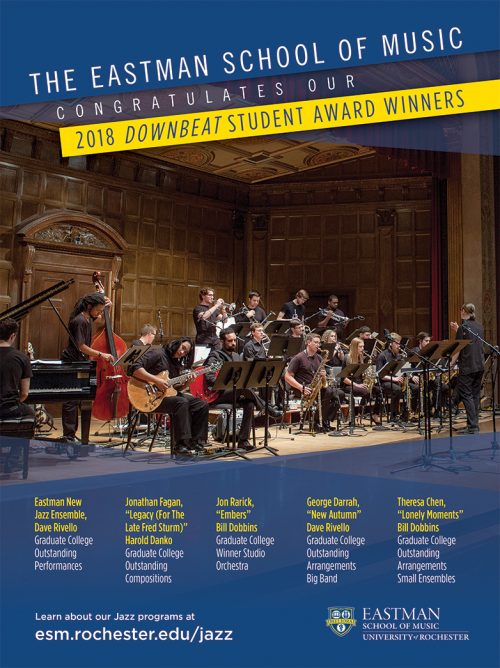 “Eastman’s Jazz and Contemporary Media department has a sustained history of excellence over many decades and having this recognized by the world’s leading jazz publication is always a tremendous honor.  All of us at Eastman are very proud of the achievements of this year’s DownBeat honorees,” shares Jamal Rossi, Joan and Martin Messinger Dean at Eastman School of Music.

The Eastman New Jazz Ensemble was recognized in the Outstanding College Performance Large Jazz Ensemble category. The ensemble performs repertoire primarily from the last 20 years, including music not often heard or yet recorded, and frequently premieres new works, including those of student writers. The group, which numbers approximately 20 musicians, previously won a DownBeat award in 2017 for Graduate College Outstanding Performance.

Fagan was recognized for Outstanding Composition for “Legacy (For the Late Fred Strum)” in the Graduate Division.  He graduated with his MM last spring.

Rarick was the Graduate College Winner Studio Orchestra for “Embers. Rarick, who graduated with his MM last spring in jazz writing, is from Grayslake, Ill. He previously won in 2017 for Outstanding Arrangement.

“Having this many students as well as one of our largest ensemble is a great honor for us,” shares Jeff Campbell, Chair of the Jazz Studies and Contemporary Media Department. “This is a great opportunity for us to showcase our students work and help them be heard by a wider audience.”

The Student Music Awards were announced in the June issue of DownBeat, one of the country’s most respected jazz magazines and often called “the bible of jazz.” The issue was mailed April 25 and will be on newsstands on May 15.