The Eastman School of Music Celebrates the Release of Samuel Adler CD One Lives but Once: A 90th Birthday Celebration: 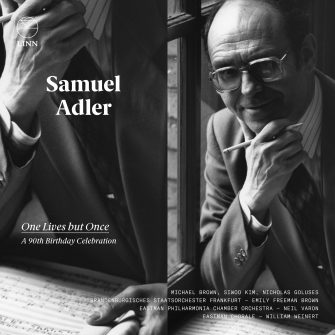 The Eastman School of Music will celebrate American composer, conductor, and former Eastman professor Samuel Adler in a CD release event for One Lives but Once: A 90th Birthday Celebration, Tuesday, May 1 at 4:00 p.m., in Hatch Recital Hall at Eastman, followed by a CD and book signing reception in Wolk Atrium for the audience. Sam was a faculty composer at Eastman from 1966 to1995, where he served as department chair of the composition department from 1974 until his retirement. The release event will include remarks and performances by a number of Eastman faculty members, several of whom were featured on the CD and who worked with Sam during his tenure at Eastman.

Samuel Adler’s large and varied catalog includes over 400 published works, including five operas, six symphonies, 12 concerti, nine string quartets, five oratorios, and many other orchestral, band, chamber and choral works and songs, which have been performed all over the world. He has also written four books including The Study of Orchestration, the standard teaching text used widely across music conservatories and universities, and his recent Building Bridges with Music: Stories from a Composer’s Life; and there are many commercial recordings of his work. Adler was inducted into the American Academy of Arts and Letters in May 2001, and inducted into the American Classical Music Hall of Fame in October 2008.

His latest recording, One Lives but Once, is a marvelous collection from Linn Records of pieces from throughout his career. The compendium of music included is a true testament to the legacy he has created with his compositions and body of work.

“A composer could not ask for a more meaningful birthday present than these three CDs which span so much of my musical output for so many years. I am especially grateful for the participation of the Eastman School in this project, since I was associated with the school for 30 years and it has meant so much in my life,” reflects Sam on this CD release. He continues,  “I am thankful to Nicholas Goluses, the many colleagues also featured, and the administration of the school for their commitment to making this such a very successful venture.”

One Lives but Once is comprised of three CDs, the third of which features an all-Eastman program, made up of both Eastman Faculty and Eastman student ensembles. It includes:

Jamal Rossi, Joan and Martin Messinger Dean at Eastman, states, “Sam Adler is one of the leading composers of the 20th and 21st centuries, and we are proud to welcome him back to Eastman where he taught on our faculty for 29 years.  We are thrilled to celebrate Sam’s remarkable contributions as a composer and teacher, and the release of his latest recording, One Lives but Once.”

“Sam represents the best of what our profession can become.  His vision of beauty is apparent with every note that he writes. Adler’s virtuosic Guitar Concerto represents some of the most rewarding (and some of the most challenging) music I have played,” states Professor Nicholas Goluses, whose beautiful guitar playing is featured on several tracks  of One Lives But Once, and who is a key player in organizing this event at Eastman.  “Sam was the first composer to welcome me to Eastman, and it has been an honor to collaborate with and to record his masterworks with my colleagues for Linn Records.”

Eastman Professor of Composition and current department chair David Liptak recounts his time as a student of Adler:, “I met Sam in 1973, when I started graduate studies as a composition major at Eastman and he was chair of the Composition Department. He was my teacher, and I was quickly propelled into the fast lane of learning more than I knew was there and working harder than I thought I could.” Liptak continues, “His energy is legendary, and this recording is a marvelous collection from Linn Records of pieces from throughout his career. The range of music found here is astonishing.”

The CD release event for Sam Adler and One Lives but Once: A 90th Birthday Celebration  is free and open to the public.  Liptak eloquently highlights the importance of this event by stating, “Samuel Adler is returning to Eastman for a celebration, in his 90th year, of his remarkable life in music as a composer and teacher, and for his robust and profound influence in the arts.”

Samuel Adler was born March 4, 1928 in Mannheim, Germany, and came to the United States in 1939. Some recent commissions have been from the Cleveland Orchestra (Cello Concerto), the National Symphony (Piano Concerto No. 1), the Dallas Symphony (Lux Perpetua), the Pittsburgh Symphony (Viola Concerto), the Houston Symphony (Horn Concerto), the Barlow Foundation/Atlanta Symphony (Choose Life), the American Brass Quintet, the Wolf Trap Foundation, the Berlin-Bochum Brass Ensemble, the Ying Quartet, and the American String Quartet to name only a few. His works have been performed recently by the St. Louis Symphony, the Los Angeles Philharmonic, the Berlin Radio Symphony Orchestra, and the Mannheim Nationaltheater Orchestra. Besides these commissions and performances, previous commissions have been received by Adler from the National Endowment for the Arts (1975, 1978, 1980 and 1982), the Ford and Rockefeller Foundations, the Koussevitzky Foundation, the City of Jerusalem, the Welsh Arts Council, and many others.

Adler has been awarded many prizes, including a 1990 award from the American Academy of Arts and Letters, the Charles Ives Award, the University of Rochester’s Lillian Fairchild Award, the MTNA Award for Composer of the Year (1988-1989), and a Special Citation by the American Foundation of Music Clubs (2001). In 1983 he won the Deems Taylor Award for his book The Study of Orchestration. In 1988-1989 he was designated “Phi Beta Kappa Scholar” At the University of Rochester. In 1989 he received the Eastman School’s Eisenhart Award for Distinguished Teaching. In 1991 he was named Composer of the Year by the American Guild of Organists. Adler was awarded a Guggenheim Fellowship (1975-1976); he has been a MacDowell Fellow for five years; and in 1993, during his second trip to Chile, he was elected to the Chilean Academy of Fine Arts  “for his outstanding contribution to the world of music as a composer.” In 1999, he was elected to the Akademie der Künste in Germany for distinguished service to music. While serving in the United States Army (1950-1952), Adler founded and conducted the Seventh Army Symphony Orchestra and, because of the Orchestra’s great psychological and musical impact on European culture, was awarded a special Army citation for distinguished service. In May 2003, he was presented by ASCAP with the Aaron Copland Award, for Lifetime Achievement in Music (Composition and Teaching).