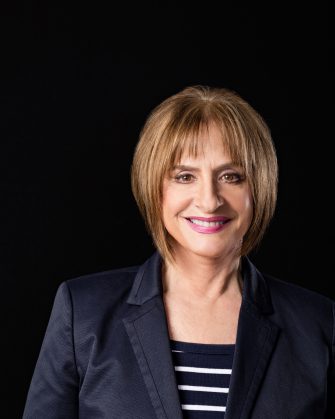 The Eastman Presents Series highlights Patti LuPone’s “Don’t Monkey with Broadway”, Sunday, April 29 at 8 p.m., in Kodak Hall at Eastman Theatre. This legendary Broadway singer will be joined by members of Rochester Gay Men’s Chorus for select numbers in this one-night-only performance.

Singer and actress Patti LuPone’s storied career in Broadway and Hollywood has spanned over four decades. A fireball of talent and a musical force to be reckoned with, Patti LuPone is one of the greatest performers in modern musical theater. Since establishing herself with a Tony Award-winning performance as Andrew Lloyd Webber’s Evita, she has impressed audiences and critics alike in Les Misérables, Sunset Boulevard, Sweeney Todd, and Gypsy (for which she won another Tony Award in 2008).

Performing with Patti LuPone are 21 members of the Rochester Gay Men’s Chorus (RGMC). “We are thrilled to have been asked to sing with Ms. LuPone.  It is an extraordinary honor, especially considering the high level of singing in Rochester,” Dr. Rob Strauss, director of RGMC, shares.  “In our history, we have been so fortunate to work with some extraordinary artists, but we know singing with Ms. LuPone will be a memory we cherish.  The fact that this is happening during our 35th anniversary, is just icing on the cake!”

In “Don’t Monkey with Broadway,” Patti LuPone explores, through indelible interpretations of classic Broadway show tunes, how her lifelong love affair with Broadway began, and her concern for what the Great White Way is becoming today.  Philadelphia Inquirer says, ““This show is about as close to perfection as you’re likely to get.”

This concert is sponsored by Dr. Eva Pressman and Dr. Seth Zeidman.

Tickets for Patti Lupone’s “Don’t’ Monkey with Broadway” performance are $26-91, with $10 student tickets available. Tickets can be purchased at the Eastman Theatre Box Office, 433 East Main St.; by phone (585) 274-3000; or online at http://eastmantheatre.org

About 900 students are enrolled in Eastman’s Collegiate Division—about 500 undergraduate and 400 graduate students. Students come from almost every state, and approximately 20 percent are from other countries. They are guided by more than 95 full-time faculty members. Seven Pulitzer Prize winners have taught at Eastman, as have several GRAMMY® Award winners. Each year, Eastman’s students, faculty members, and guest artists present more than 700 concerts to the Rochester community.