Eastman Partners with Music Conservatory in Freiburg, Germany for May Concert 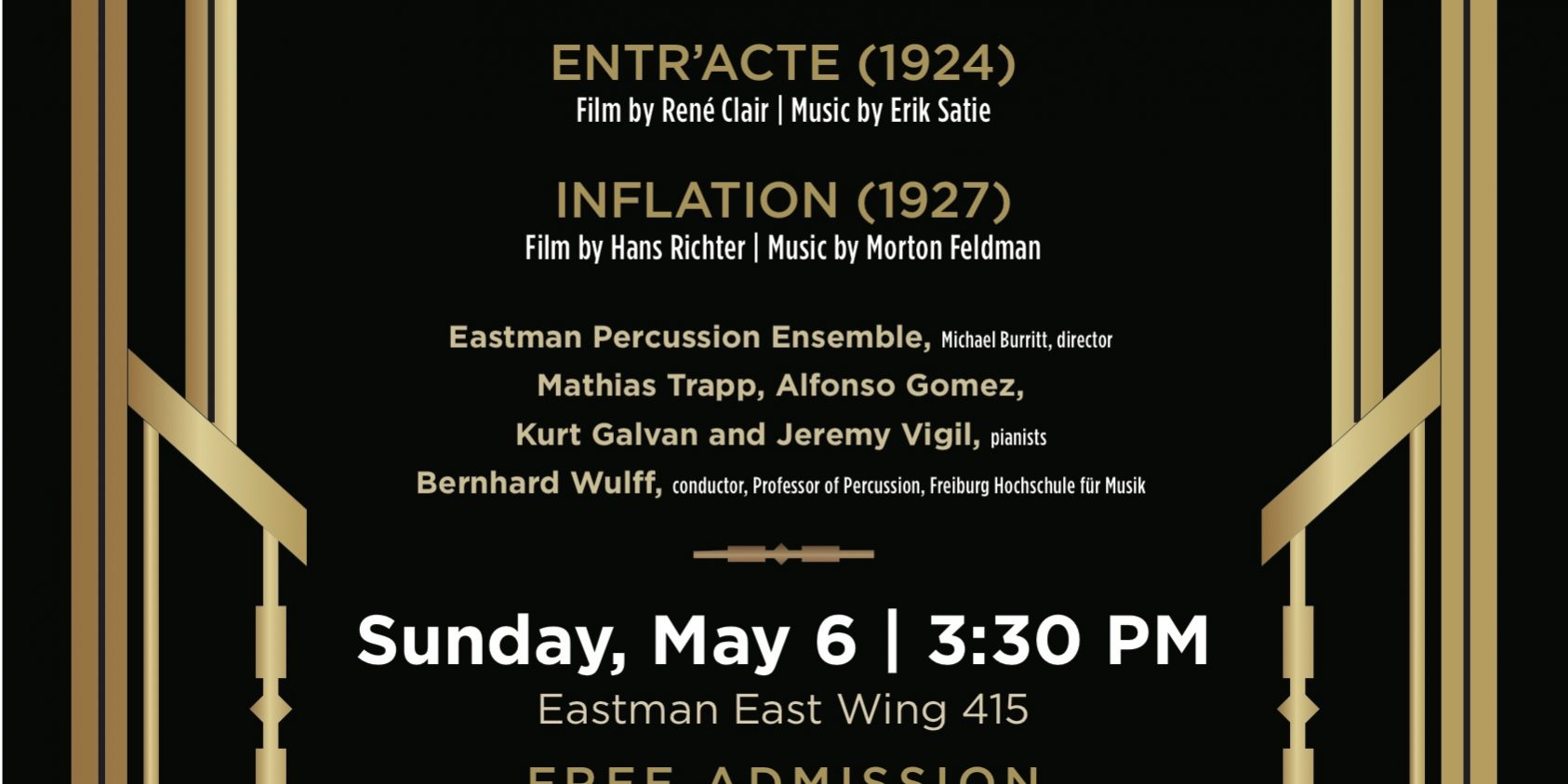 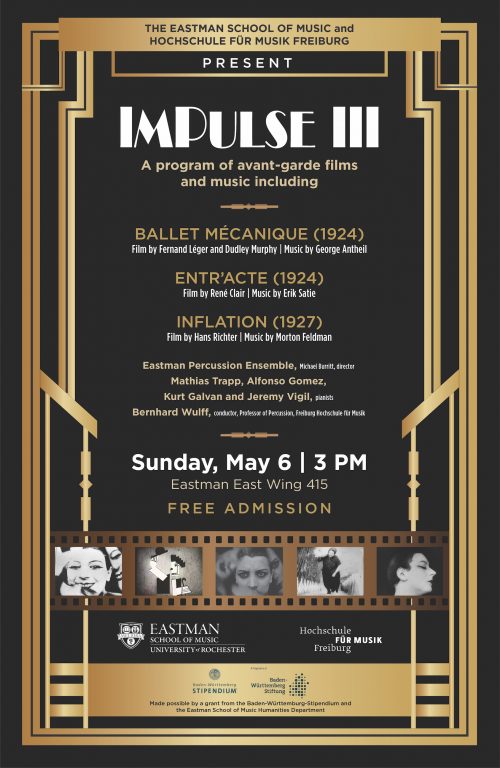 For several years, Eastman has had a partnership with the Hochschule fur Musik in Freiburg, Germany, and it’s recently been re-energized.  As part of a two-year grant from the German government to support collaborations between the schools, the partnership culminates in a concert to be presented on Sunday, May 6 at 3:00 p.m. in Room 415 of Eastman’s East Wing, 433 East Main Street. Impulse III: A program of avant-garde films and music will include a performance of George Antheil’s Ballet Mécanique.  Also on the program will be other films from the same time period including; Entre’Acte with music by Erik Satie, and Inflation by film maker Hans Richter with music later composed by Morton Feldman.

The performance will involve accompaniment by the Eastman Percussion Ensemble, directed by Eastman Professor Michael Burritt and conducted by Bernhard Wolff, Professor of Percussion at the Hochschule in Freiburg, along with two piano professors from Freiburg – Mathias Trapp and Alfonso Gomez — and two doctoral piano students here at Eastman – Kurt Galvan and Jeremy Vigil.  As part of the partnership this same concert will be performed in Freiburg, led by Michael Burritt, Professor of Percussion at Eastman, and will be comprised of Freiburg percussion students and pianists from both schools.  In addition, the visit to Freiburg will conclude with a cooperatively-organized academic symposium.

“This concert repeats a legendary event staged by John Beck and Bernhard Wulff in the early 1990s, namely the performance of the wild and wacky Ballet Mechanique (1924) for four pianos, percussion, and film. The film is a masterpiece by cubist painter Fernand Leger and photographer Man Ray, the score by George Antheil was celebrated in Paris in 1926 and caused riots in Carnegie Hall a year later,” shares Professor Reinhild Steingröver, Professor of German in the Humanities Department at Eastman School of Music. Steingröver is also Affiliate Professor Program in Film Studies at the University of Rochester

The partnership with the Musikhochschule Freiburg has existed since the mid-1980s.

It was created to foster a lively international exchange of the latest research in music teaching and learning, and to intensify scholarly collaboration students and faculty members of both schools. Joint concerts in Germany and the US, as well as a cooperatively-organized symposium in 2018 will round out the program.

Steingröver elaborates, “The partnership a strengthens international exchange between students. The Freiburg students visit in my classes and speak to Eastman students about the differences between studying at a conservatory in Germany and in the US and encourages long and short-term study abroad ideas. I am currently developing a study abroad/hybrid Humanities course with Freiburg specifically for Eastman students.”