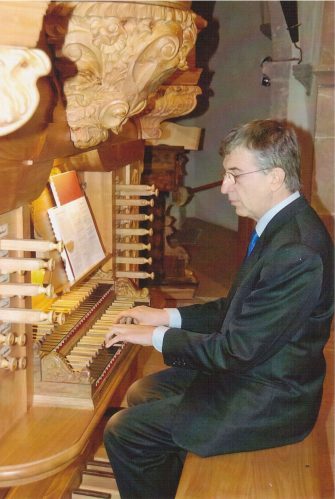 The Faculty Artist Series presents harpsichordist Edoardo Bellotti, Associate Professor of Organ, Harpsichord and Improvisation, Saturday, March 24, at 8 p.m., in Hatch Recital Hall, at the Eastman School of Music. The program is a Francois Couperin 350th Anniversary Celebration, titled ‘’Francois Couperin and his Time”. Included are movements from Couperin’s L’Art de toucher le clavecin and Pièces de Clavecin, I and II Livre, as well as Georg Bohm’s Suite in C Minor and Praeludium, Fugue and Postludium in G Minor, and Alessandro Scarlatti’s Toccata in G Minor and Partita sopra Follia.

Internationally renowned organist and harpsichordist Edoardo Bellotti performs as a soloist and with ensembles and orchestras in Europe, the United States, Canada, Japan, and Korea.  He is frequently invited to give seminars and master classes as an expert of Renaissance and Baroque repertory, performance practice, and improvisation.  In addition to his musical studies (organ and harpsichord), he studied humanities at the University of Pavia, Italy, completing laurea degrees in philosophy and theology.

In addition to teaching and performing, he has devoted himself to musicological research, publishing articles, essays and critical editions of organ music, and presenting his work in many international conferences and symposia. He has edited the first modern edition of two of the most important Baroque treatises on organ playing: Adriano Banchieri “L’ Organo suonarino” (Venice 1605), and Spiridion a Monte Carmelo “Nova Instructio pro pulsandis organis, spinettis et manuchordis” (Bamberg 1670).  He has made more than thirty recordings on historical instruments, which have obtained critical acclaim.