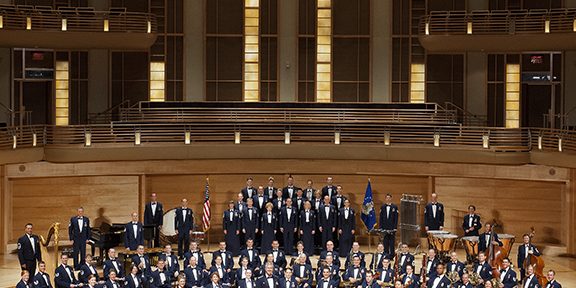 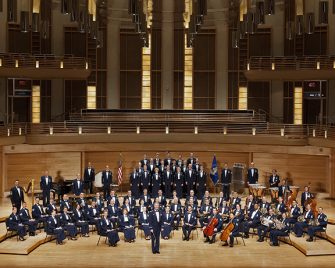 The Eastman School of Music is proud to host the United States Air Force Concert Band and Singing Sergeants on their Spring Tour to Kodak Hall in Eastman Theatre on Tuesday, April 10 at 7 p.m. with opening remarks by Deputy Mayor Dr. Cedric Alexander. There are several Eastman connections with this concert: an original piece, Pseudovector, composed by Assistant Professor of Music Theory Matthew Curlee included in the program; featured soloist Michael Burritt, Professor of Percussion at Eastman; four Eastman alumni; two Rochester natives; and guest conductor Mark Scatterday, Professor of Conducting and Ensembles, who will be conducting his piece La Salsa.  The program also includes several genres of music, including a Broadway medley, traditional band marches, Americana, and much more.

“I am honored to welcome the United States Air Force Concert Band and Singing Sergeants to Rochester,” said Mayor Lovely A. Warren. “Our city is truly fortunate to be the home of the Eastman School of Music, which continues to create opportunities for our citizens to experience the nation’s highest caliber of musical talent. Events like this add to the cultural richness of Rochester, which further enhances our ability to create more jobs, safer and more vibrant neighborhoods, and better educational opportunities for our citizens.”

Eastman professor Matthew Curlee was commissioned to write an original composition for the Air Force Band, featuring soloist and Eastman colleague Michael Burritt. “As a composer, writing for a soloist and an ensemble such as these, both of such legendary virtuosity, is an opportunity to put the pedal to the metal in terms of both technical possibilities and expressive range.  In our past collaborations, Michael and I have always had a great stylistic resonance.” Pseudovector was premiered on the Air Force Band’s Guest Artist Series with Michael Burritt in Alexandria, Virginia, on February 22. Matthew continues, “There’s always some trepidation the first time you work with any ensemble – you want to write something that they’ll be excited about – but knowing Mike’s particular artistic voice and being able to write so specifically for him helped the piece come together in quite a free-flowing way.”

“It is such an honor a privilege to be guest artist with the Air Force Band. I have known about the outstanding reputation of the group since I was a high school student in the New York All-State Band under the baton of Arnald Gabriel, the famous conductor of the band for many years,” shares Michael Burritt. He continues, “It’s a thrill for me to play one of my pieces, White Pines, for four percussionists and myself soloing on marimba, along with Matthew Curlee’s new piece, with such amazing musicians!  I have no doubt this concert at Eastman will be a highlight of the year for me.”

“It’s so great to finally come through this part of New York State and be back on the stage of Kodak Hall,” says Technical Sgt. Brian Wahrlich, a graduate of the Eastman School of Music. “As the Tour Manager for the Concert Band, I reached out to Eastman as a first priority and built the entire tour around this extraordinary venue. I feel so honored and humbled to bring the band to Eastman, to perform on stage as a professional clarinetist, and to continue collaborations with this world-class institution.”

Tickets for the US Air Force Band are free, but you need to reserve your seat. You can reserve your seat online at the Eastman Theatre Box Office, 433 East Main St.; by phone (585) 274-3000; or online at http://eastmantheatre.org

With its present home on Joint Base Anacostia-Bolling in Washington, D.C., THE UNITED STATES AIR FORCE BAND is the Air Force’s premier musical organization. Since its formation in 1941 as the Army Air Forces Band, the excellence demonstrated by the Band’s Airmen musicians has reflected the excellence carried out 24 hours a day by Airmen stationed around the globe. Today, The Air Force Band consists of six performing groups: Air Force Strings, Airmen of Note, Ceremonial Brass, Concert Band, Max Impact and Singing Sergeants. This premier musical unit continues to honor those who serve, inspire patriotism and military service in fellow citizens and impact the global community positively.

The Concert Band and Singing Sergeants perform together on a regular basis, representing the U.S. Air Force and our country as part of The United States Air Force Band. They frequently perform for national television broadcasts and online videos, including the Band’s annual holiday flash mobs, which have been viewed by millions worldwide. Whether these groups are performing in the metropolitan Washington, D.C. area, throughout our great country, or around the world, they are proud to represent all Airmen, whose selfless service and sacrifice ensure the freedoms we enjoy as citizens of the United States of America.