A Night of Jazz Honoring one of the Great Pioneers: Including The Monty Alexander Trio and Piano Duo Bill Charlap & Renee Rosnes 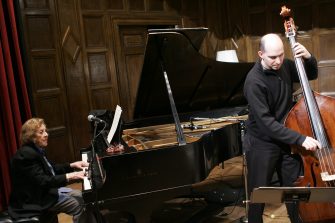 2018 would have been Marian McPartland’s 100th birthday year, and to celebrate her legacy, her vibrant music and deep connection to the Eastman School of Music, Eastman Presents “Marian McPartland Centennial Celebration” on March 23, 2018 in Kodak Hall at Eastman Theatre. The night will be filled not only with musical and video tributes to Marian, but audiences will also be treated to a full lineup of jazz at its best, including guest artists such as The Monty Alexander Trio, piano duo Renee Rosnes & Bill Charlap, as well as several Eastman Jazz Studies professors, including Harold Danko, Bill Dobbins, Jeff Campbell, Gary Versace, Rich Thompson, and Tony Caramia each of whom had a personal relationship with Marian. Their admiration for Marian’s craft and the person that she was, led to the creation of this tribute. The emcee for the event will be Jack Garner, esteemed film and arts editor, formerly of the Democrat and Chronicle.

Considered a true pioneer, not only for women in jazz, but in the genre itself, Marian was an accomplished jazz pianist, much beloved for her presence on National Public Radio as the host of Marian McPartland’s Piano Jazz for over three decades. Piano Jazz offered listeners an intimate, insider’s perspective on the elusive world of jazz improvisation. On her weekly broadcast, Marian McPartland interviewed and performed with practically every major jazz musician of the post-WWII era. She is also revered for her live performances, symphonic work, and compositions. Marian was awarded a Grammy for lifetime achievement in 2004, and in 2010 received the Order of the British Empire.

In a joint statement, Renee Rosnes & Bill Charlap speak to Marian’s influence, saying, “Marian McPartland will forever be celebrated as one of the all-time great jazz musicians. She must have known over a thousand tunes, and had the confidence to play a song off the top of her head, in any key, and she loved challenging herself and her guests with extemporaneous free-form playing. Hers was a truly open musical mind, fueled by the desire to learn something new, always willing to explore a fresh musical concept. Marian was an irreplaceable spirit, an international star, a singular artist, and an elegant human being.”

Over the course of her illustrious career as a performer, educator, and writer, Marian came to Eastman numerous times, spanning several decades, to guest teach, lead master classes, and hear her work performed by the students. Jeff Campbell, Professor of Jazz Studies here at Eastman, was not only a guest on Marian’s NPR show, but he performed in a trio with her throughout upstate New York and also developed a close relationship with her over the years. Campbell shares, “Marian was a modest, humble, woman who placed supporting others ahead of anything. She wanted to find young talent and help promote their careers. The legacy of what Marian did for our community and the opportunity to pay tribute to that kind of humanity here at Eastman is so important.”

This is the only performance of its kind nationally that celebrates Marian’s music and impact on the jazz world. Marian’s relationship with Eastman led to many of her archives being donated here, as well as her personal piano, which will be played onstage during the centennial celebration by various musicians. She sponsored a piano concert series here at Eastman for several years, aimed to help young pianists as they forged their careers. Eastman retains recordings of her work here and compositions written in her own hand.

“Marian was a juxtaposition of complexity and simplicity at the same time,” Campbell recalls fondly. “She could be avant-garde and forward-thinking, and then play or create a four-bar tune that had you bewildered by its simplicity and perfection.”

Adds Gary Versace, “As both a guest on Marian’s show, and in my personal interactions with her, it’s such a pleasure to celebrate her life and legacy here at Eastman and with the Rochester community in this unique event. What I admired about Marian was her musicianship, to be sure, but also her warmth and candor.”

Harold Danko, Professor Emeritus, and one of the men responsible for creating this event states, “She was a great friend to me, but also a truly wonderful friend to the Eastman School of Music.”

This celebration not only pays tribute to Marian—her music will be played by various artists and there will be a rousing collaboration of ‘playing the blues’ all together—but also showcases her influence on jazz musicians today, as well as the music she left behind. This is an event that no jazz lover should miss—from aficionado, to amateur musician, to appreciative listener.

Tickets for the Marian McParland centennial celebration are $26-$71, with $10 student tickets available to purchase. Tickets can be purchased at the Eastman Theatre Box Office, 433 East Main St.; by phone (585) 274-3000; or online at http://eastmantheatre.org

About 900 students are enrolled in Eastman’s Collegiate Division—about 500 undergraduate and 400 graduate students. Students come from almost every state, and approximately 20 percent are from other countries. They are guided by more than 95 full-time faculty members. Seven Pulitzer Prize winners have taught at Eastman, as have several GRAMMYS® Award winners. Each year, Eastman’s students, faculty members, and guest artists present more than 700 concerts to the Rochester community.