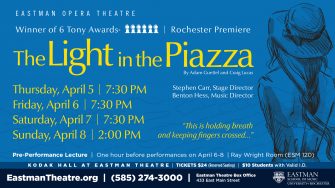 Eastman Opera Theatre’s upcoming performance of The Light in the Piazza, with music and lyrics by Adam Guettel, and book by Craig Lucas, will be presented April 5, 6, 7, and 8 at Kodak Hall at Eastman Theatre. This stunning musical is the winner of six Tony Awards, including Best Original Score. As the first Broadway musical to be presented by Eastman Opera Theatre in Kodak Hall, this production marks a turning point for the Opera Department and the school. The Light in the Piazza is directed by Stephen Carr, with musical direction by Benton Hess.

The Light in the Piazza takes place in Italy in the summer of 1953. Margaret Johnson, the wife of an American businessman, is touring the Tuscan countryside with her daughter, Clara. As The Light in the Piazza unfolds, a secret is revealed: in addition to the cultural differences between young lovers Clara and Fabrizio, Clara is not quite all that she appears. Unable to suppress the truth about her daughter, Margaret is forced to reconsider not only Clara’s future, but her own hopes as well.

Director Stephen Carr gives some insight into the production: “We’re thrilled that The Light in the Piazza will be our first Broadway musical presented in Kodak Hall, and in many ways, it seems the perfect title to have that distinction.” He continues, “With its demanding vocals, emotional storyline, and sweeping score (large portions of which are sung in Italian), it seems a natural extension of the operatic tradition that has long been the bread-and-butter of Eastman Opera Theatre. But it also marks an exciting step forward for us, because in fully embracing the evolution of the art form we’re also able to expand the variety of productions Eastman can offer the Rochester community.”

Eastman Opera Theatre was fortunate to have composer-lyricist Adam Guettel in residency with Eastman students in February, to work on staging, character development, and vocal master classes, as well as providing invaluable insights into his own creative process. Guettel himself initiated the visit to Eastman, something he certainly does not do for every production of his show. “Piazza, at its heart, is about love. To work with a young cast of students on capturing that love, and the honesty in the lyrics and music—that’s the joy of teaching and seeing your work continually come to life.”

Guettel is providing an additional aspect to Eastman’s production. “Kim Grigsby and I have done expanded orchestrations for The Light in the Piazza — with the premier of this version being Eastman’s production.” The audience will certainly appreciate the expanded orchestrations for what is already a beautiful, lush score. “Having a wealth of talented musicians is a gift,” Adam continues.  “The caliber of Eastman students is at such a high level. They’re game for anything and they’re very serious about their work.”

The Light in the Piazza also marks Benton Hess’ last show as music director of Eastman Opera Theatre, before his retirement at the end of the academic year. “Adam Guettel has created a stunning work, which I think is more operatic than perhaps even he, himself, knows. The music is lyrical, very beautiful, and compelling. The story is simple on its surface but complex at its core, and we are all emotionally engaged to the extreme in this production. Not a single rehearsal passes when I don’t want to burst into tears…from joy!”

Tickets for Light in the Piazza are $24 General Admission. $10 student tickets available. Tickets can be purchased at the Eastman Theatre Box Office, 433 East Main St.; by phone (585) 274-3000; or online at http://eastmantheatre.org