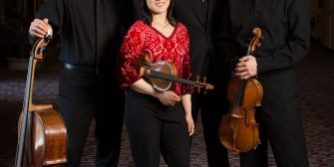 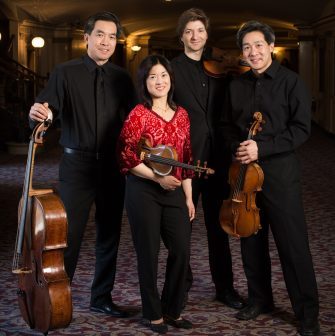 The internationally renowned, award-winning Ying Quartet is back in its prominent position within the Eastman-Ranlet Series, with a presentation Sunday, January 21, at 3 p.m., Kilbourn Hall at the Eastman School of Music. Featuring violist, Masumi Per Rostad in a program that includes Mozart’s String Quintet in G minor, K. 516 and Brahms’ String Sextet in G major, Op. 36.

Masumi Per Rostad, a new addition to Eastman’s Strings, Harp and Guitar Department, has forged a career both as a soloist and as a member of the Pacifica Quartet.  Rostad has served on the faculties of the Jacobs School of Music at Indiana University, the University of Illinois at Urbana-Champaign, the University of Chicago, and Northwestern University, and given numerous solo and chamber music master classes at schools, venues, and festivals including the Cleveland Institute of Music, the Colburn School, the New York Youth Symphony, Suntory Hall, Sydney Conservatory, the Royal College of Music, the San Francisco Conservatory of Music, and the Aspen and Bowdoin festivals. Rostad has also been a contributing writer to such publications as Strings, Gramophone, The Huffington Post, and The Guardian.

Now in its second decade, the Ying Quartet, consisting of Robin Scott, violin; Janet Ying, violin; Phillip Ying, viola; David Ying, cello, has established itself as an ensemble of the highest musical qualifications. Their performances regularly take place in many of the world’s most important concert halls, from Carnegie Hall to the Sydney Opera House; at the same time, the Quartet’s belief that concert music can also be a meaningful part of everyday life has also drawn the foursome to perform in settings as diverse as the workplace, schools, juvenile prisons, and the White House. In fact, the Ying Quartet’s constant quest to explore the creative possibilities of the string quartet has led it to an unusually diverse array of musical projects and interests.

They have been quartet-in-residence at Eastman in 1997.  All members of the Ying Quartet teach in the string department as Associate Professors in their discipline and lead a rigorous, sequentially designed chamber music program. One cornerstone of chamber music activity at Eastman is the noted “Music for All” program, in which all students have the opportunity to perform in community settings beyond the concert hall.