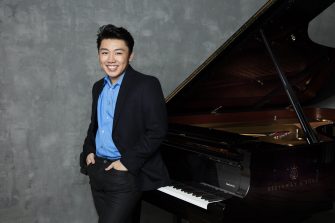 Praised by the Washington Post for combining “staggering technical prowess, a sense of command and depth of expression,” pianist George Li possesses brilliant virtuosity and effortless grace far beyond his years. He captured the Silver Medal at the 2015 International Tchaikovsky Competition and was the recipient of the 2016 Avery Fisher Career Grant.

George is an exclusive Warner Classics recording artist, with his debut album releasing in October 2017 which was recorded live from the Mariinsky.  George Li gave his first public performance at Boston’s Steinway Hall at the age of ten and in 2011, performed for President Obama at the White House in an evening honoring Chancellor Angela Merkel. Among George’s many prizes, he was the First Prize winner of the 2010 Young Concert Artists International Auditions and a recipient of the 2012 Gilmore Young Artist Award. George is currently in the Harvard University / New England Conservatory joint program, studying with Wha Kyung Byun.

George Li’s appearance is made possible by Vincent and Christina Lenti.

About 900 students are enrolled in Eastman’s Collegiate Division– about 500 undergraduate and 400 graduate students. Students come from almost every state, and approximately 20 percent are from other countries. They are guided by more than 95 full-time faculty members. Six alumni and three faculty members have been awarded the Pulitzer Prize for Music, as have numerous GRAMMYÓ Awards. Each year, Eastman’s students, faculty members, and guest artists present more than 700 concerts to the Rochester community.