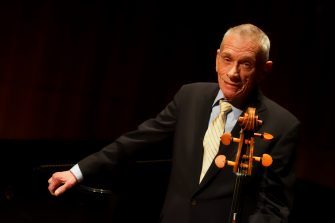 The Faculty Artist Series presents Alan Harris, Distinguished Professor of Violoncello, Saturday, February 3, at 8 p.m., in Hatch Recital Hall at the Eastman School of Music. The concert, titled “An Evening of Trios”, includes performances by Eastman faculty members Bin Huang on violin and Siu Yan Luk on piano. The program includes trios for violin, violoncello, and piano by Charles Ives and Leonard Bernstein, as well as Beethoven’s Trio, Op. 70, No.1, “Ghost”.

Alan Harris, in addition to teaching at the Eastman School of Music, was an artist-faculty member at the Aspen Music Festival and School from 1974 to 2013, where he performed with Claus Adam, the Cleveland Quartet, Ronald Leonard, Jan DeGaetani, Albert Tipton, Gidon Kremer, Karen Tuttle, Malcom Frager, Brooks Smith, Pinchas Zukerman, and others. More recently, he has taught at the Castleman Quartet Program and Aria at Mount Holyoke College. Mr. Harris held the post of Kulas Professor of Music, Chair of the String Department, and Coordinator of Chamber Music at the Cleveland Institute of Music, and was director of the Cleveland Chamber Music Seminar. Other previous faculty appointments include the Inter-American University of Puerto Rico, Ohio Wesleyan and Northwestern Universities, visiting professor and faculty member at the Eastman School of Music, and visiting professor at Northern Illinois University. Mr. Harris studied with Raymond Stuhl at the University of Kansas and with János Starker at Indiana University.

An active recitalist, soloist, and chamber musician, he served as cellist with the Eastman Quartet, was a first-desk player with the Rochester Philharmonic, and was principal cellist of the Eastman and Rochester chamber orchestras. During his distinguished teaching career Mr. Harris has given numerous solo and chamber music master classes and has been active as a panelist and lecturer. His students occupy prestigious positions throughout the music world.