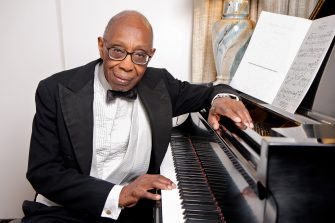 The Eastman School of Music is proud to celebrate the 95th birthday year of composer and pianist George Theophilus Walker in a special alumnus recital on Monday, April 2 at 7:30 p.m., in Hatch Recital Hall at Eastman, followed by a champagne toast and reception in Wolk Atrium for the audience. The recital, comprised of the complete (5) piano sonatas of George Walker, will be performed by Albanian pianist Redi Llupa, with opening remarks by Jamal Rossi, the Joan and Martin Messinger Dean at Eastman.

The first African American to graduate with a Doctorate from Eastman in 1956, and the first African-American composer to win a Pulitzer Prize (for Lilacs for Voice and Orchestra) in 1996, George Walker’s Eastman accolades also include an Alumni Achievement Award in 1975 and the Rochester Distinguished Scholar Medal in 1996.

“It was fortuitous for me to read an article in the New York Times in 1954 about the DMA Degree created by Dr. Howard Hanson at Eastman when I was teaching at Dillard University, a small black private college in New Orleans,” Walker recalls. “I applied for admission into the graduate program and was extremely happy to receive a fellowship. During that time Dr. Hanson proposed that DMA candidates could select a project that was not a dissertation for the DMA Degree. I chose to compose my Piano Sonata No. 2. This work has become one of the most performed American piano sonatas.”

That piano sonata, along with four others, will make up the program for Walker’s 95th birthday celebration at Eastman. “Having all five of my piano sonatas performed by Redi Llupa in a celebration of my music is very special. They represent additions to the repertoire of piano literature that should be known.” Walker adds on a personal note, “My son, Gregory, will participate in the celebration by playing my Sonata for Violin and Piano No. 1.”

Walker’s career and legacy is brimming with accomplishments and successes. He blazed the trail for many African-American musicians by being; the first black instrumentalist to appear with the Philadelphia Orchestra, the first black instrumentalist to be signed by a major management, the National Concert Artists; the first black tenured faculty member at Smith College; first recipient of the Minority Chair established by the University of Delaware; and  the first composer to receive the Whitney award. George Walker has composed over 90 works for orchestra, chamber orchestra, piano, strings, voice, organ, clarinet, guitar, brass, woodwinds, and chorus.

“George Walker is one of the most prolific and accomplished American composers of the last century. In addition to having been awarded the coveted Pulitzer Prize, he has been honored by some of our nation’s leading cultural organizations including the American Academy of Arts and Letters, and the American Classical Music Hall of Fame,” shares Dean Jamal Rossi. “We are very proud to consider Dr. Walker as one of Eastman’s most distinguished alumni, and I am privileged to know him as a friend.”

Walker’s works have been performed by virtually every major orchestra in the United States, and by many in England and other countries.  His awards include the Harvey Gaul Prize, MacDowell Colony, Yaddo and Bennington Composer Conference Fellowships, two Guggenheim Fellowships, two Rockefeller Fellowships, a Fromm Foundation commission, two Koussevitsky Awards, an American Academy of Arts and Letters Award, a Mary Flagler Cary Charitable Trust Award, the Mason Gross Memorial Award, numerous grants from the Research Councils of Smith College, The University of Colorado, Rutgers University, the National Endowment for the Arts, and the New Jersey Council on the Arts.  He has received two Alumni Awards from the Eastman School of Music, the University Medal from the University of Rochester (1996), honorary doctorate degrees from Lafayette College (1982), Oberlin College (1983), Montclair State University, Bloomfield College, Curtis Institute of Music (1997) and Spelman College (2001).

“George Walker is one of the great musical visionaries of our age,” adds Lee Koonce, President & Artistic Director, Gateways Music Festival, in association with Eastman School of Music.  “His music is engaging, often brilliantly rhythmic and frequently contains very American references.  Eastman and Gateways Music Festival are delighted to celebrate Dr. Walker’s 95th birthday year and we congratulate him on his extraordinary career.”

Walker also received the Dorothy Maynor Outstanding Arts Citizen Award in 2000 from the Harlem School of Arts. In March of 2001, the Detroit Symphony awarded him its first annual Classical Roots Award for a lifetime of achievement in American Music. George Walker has been awarded the prestigious A. I. duPont Award, presented by the Delaware Symphony, in 2002. In 2003 he was selected for inclusion in the Washington Music Hall of Fame (Washington, DC).

It is fitting that Walker’s 95th birthday musical celebration will be at Eastman, as one of the featured pieces is one he wrote while attending as a student.  “I am most grateful for the continuity of my connection with Eastman, a wonderful institution,” Walker reflects. “The support that Eastman has given me since I graduated in 1956 has been truly amazing.”

The George T. Walker 95th Birthday Year Celebration recital is free and open to the public.

Albanian pianist Redi Llupa has given many distinguished performances in important venues throughout Europe, North America, South America, and Asia. His repertoire reaches from Bach, Beethoven, Brahms, Liszt, and Debussy to Berio, Takemitsu, Messiaen, Walker, Furrer, Bejo, and Peçi. Llupa graduated from the Boston Conservatory with a Master’s degree from the Jacobs School of Music at Indiana University with renowned Menahem Pressler.  In 2016 he earned the Doctor of Musical Arts in piano performance at Frost School of Music at University of Miami, where he studied with the acclaimed virtuoso Santiago Rodriguez. Throughout the years he has also received meaningful artistic input from Richard Goode, Cyprien Katsaris, André Laplante, Jorge Federico Osorio, and Matti Raekallio.