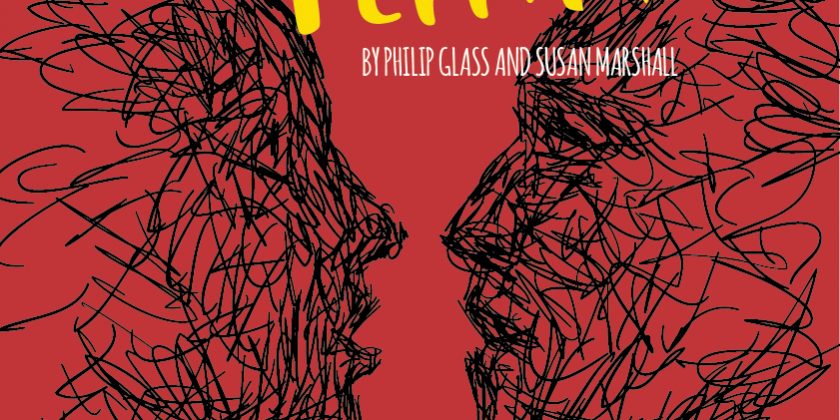 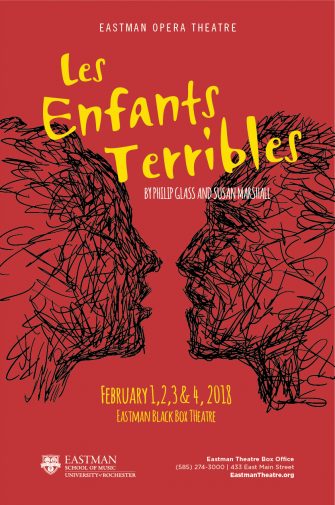 A private world between brother and sister is played out with imagination and destruction in Eastman Opera Theatre’s upcoming performance of Les Enfants Terribles by Philip Glass on February 1, 2, 3, and 4 in Annex 804 at Eastman School of Music. This hybrid dance-opera with music by Philip Glass, and text adapted from the work of Jean Cocteau by Philip Glass and Susan Marshall, is directed by Steven Daigle, the Artistic Director of Eastman Opera Theatre. Music Director is Wilson Southerland and choreographer is Eran Hanlon.

Articulating Cocteau’s belief in the transcendent power of imagination and creativity, Les Enfants is the story of Paul and Lise, two characters so caught up in a world of their own imaginings that they can no longer see reality. As described by Cocteau:

‘It was Sunday. Snow was falling. Lise had stayed in bed all day. She slept. She dreamed. In her dream, Paul was dead…walking…in a strange way. She took the blue path. It led to the blue carpet from the gallery. She climbed a hill. She went behind a curtain. The abstract room had changed. Paul was lying on a billiard table. In her dream, the table was called ‘despair.’ Lise reached ‘despair’ and reached over Paul. Her hand touched the revolver. Her right hand touched Paul’s hand. Paul said: “listen, the bell of goodbyes.” He no doubt meant the sound of the gun.’ From Jean Cocteau, Les Enfants Terribles.

Director Steven Daigle gives some insight into the production: “A brother and sister (Paul and Elisabeth), left orphaned in their teens, create a private world within a shared bedroom where they find comfort and dependency through ‘the game’ – Paul and Elisabeth’s delusional combination of unadulterated fantasies. The ‘game’, once innocent, becomes marred with power, control, jealousy and destruction as the pressure of adulthood and society’s expectations attempt to invade the room these siblings have created.”

Eastman Opera Theatre is always trying to create new experiences for students, and in Les Enfants Terribles singers and dancers simultaneously portray the action. Daigle shares, ‘This unique opera requires a very important dance component.  Two members of the professional dance community of Rochester are choreographed by Eran Hanlon.  The dancers supply an abstract expressive style to the worlds of the siblings Paul and Elizabeth.  From moments of a childish naïve energy, a self-centered possessiveness to a sexual tension, the dancers weave through the space and storyline adding a counterpart to the singers and percussive like rhythm of the three-piano instrumental ensemble.’

The performance runs 1 hour, 30 minutes without an intermission. There will be no late seating. Pre-performance talks will be presented one-hour prior in the Eastman Opera Studio. The opera will be performed in French with English supertitles.

Tickets for Les Enfants Terribles are $24 General Admission. $10 student tickets available. Tickets can be purchased at the Eastman Theatre Box Office, 433 East Main St.; by phone (585) 274-3000; or online at http://eastmantheatre.org