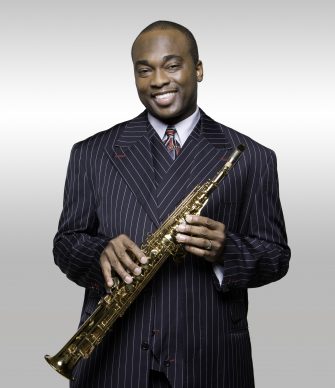 The Eastman Wind Ensemble (EWE) will perform with  jazz saxophonist James Carter on Monday, February 5 at 8 p.m., in Kodak Hall at the Eastman School of Music. The program includes: Roberto Sierra’s Saxophone Concerto, featuring James Carter, as well as David Maslanka’s Symphony No. 4, as a memorial for the composer, who died this past August.

The performance of Sierra’s Saxophone Concerto will be a premiere of a wind arrangement by Mark Scatterday, Chair and Professor of Conducting and Ensembles at the Eastman School of Music. Sierra composed the concerto as a classical piece for a large orchestra or ensemble, but the saxophone part was written specifically for Carter. Both the tenor and soprano saxophones are incorporated and featured in the piece, and Sierra has composed it in a way that allows Carter free reign to improvise in sections in his own style.

EWE students benefit greatly from having such a distinguished artist as James Carter playing with them for this concert. “It’s important, in this day and age, for our student performers to be able to play in many genres. This concerto challenges them to ‘cross-over’ from the classical world and into a medium that challenges them to be more eclectic stylistically,” shares Mark Scatterday, Conductor for EWE, as well as arranger for this piece. “Performing with an artist that is comfortable in many styles will really be beneficial for their professional careers – the old boundaries of all types of music has really started to be quite blurry, and exciting!”

James Carter’s experience with this piece began with its conception with the composer Roberto Sierra, and with the opportunity to collaborate and give input as the piece was shaped. He has since played the piece at several concerts and venues, and finds new moments and nuances each time he plays, citing each orchestra and audience as inspiration. “I look forward to the fresh energy at Eastman. Being able to reiterate what this piece has done for me- and continues to do for me every time I play it is something I want to share,” Carter explains. “I would love to have students take that inspiration away with them. Keep pieces as new and exciting as possible. Find the relevance — make them connect to you.”

The opportunity for Rochester audiences, as well as Eastman students, to hear a talent like James play at a free concert is just one example of the remarkable events coming out of Eastman.

The concert is free and open to the general public.