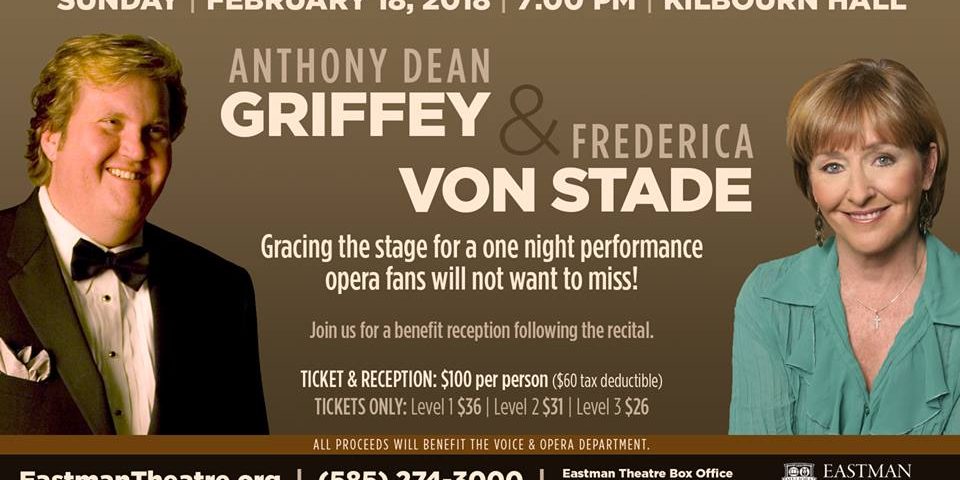 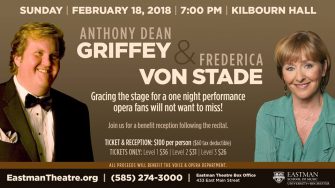 Two world-renowned stars of the opera stage, mezzo-soprano Frederica von Stade and current Professor of Voice, Anthony Dean Griffey will perform a benefit concert Sunday, February 18, at 7 p.m., in Kilbourn Hall at the Eastman School of Music. Together von Stade and Griffey, with pianist Russell Miller, Professor of Vocal Coaching and Repertoire, will grace the Kilbourn Hall stage for a one-night performance that opera fans will not want to miss.

Described by the New York Times as “one of America’s finest artists and singers,” Frederica von Stade continues to be extolled as one of the music world’s most beloved figures. Known to family, friends, and fans by her nickname “Flicka,” the mezzo-soprano has enriched the world of classical music for three decades with her appearances in opera, concert, and recital. Since her debut with the Metropolitan Opera in 1970 she has sung nearly all of her great roles with that company. In addition, von Stade has appeared with every leading American opera company, including San Francisco Opera, Lyric Opera of Chicago, and Los Angeles Opera. Her career in Europe has been no less spectacular, with new productions mounted for her at Teatro alla Scala, Royal Opera Covent Garden, the Vienna State Opera, and the Paris Opera.

All proceeds will benefit the Eastman Voice and Opera Department.

Tickets for this benefit concert are $26-36 or $100 ($60 tax deductible) for both a ticket and reception where guests can meet Griffey and von Stade. The concert is free to students with ID. Tickets can be purchased at the Eastman Theatre Box Office, 433 East Main St.; by phone (585) 274-3000; or online at http://eastmantheatre.org