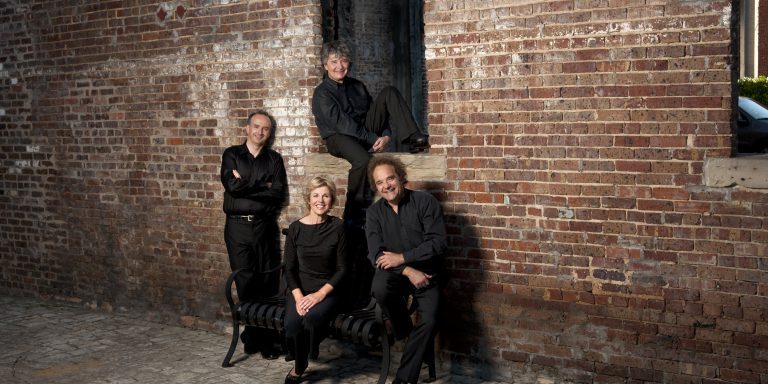 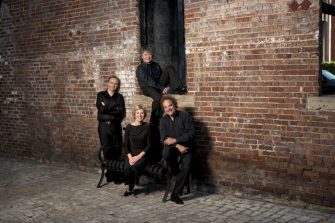 Made up of Edward Dusinberre (first violin), Károly Schranz (second violin), Geraldine Walther (viola), and Adrás Fejér (cello), The Takács Quartet, now entering its forty-second season, is renowned for the vitality of its interpretations. The New York Times recently lauded the ensemble for “revealing the familiar as unfamiliar, making the most traditional of works feel radical once more”, and the Financial Times described a recent concert at the Wigmore Hall: “Even in the most fiendish repertoire these players show no fear, injecting the music with a heady sense of freedom. At the same time, though, there is an uncompromising attention to detail: neither a note nor a bow-hair is out of place.” Based in Boulder at the University of Colorado, the Takács Quartet performs eighty concerts a year worldwide.

They became the first string quartet to win the Wigmore Hall Medal in May, 2014. The Medal, inaugurated in 2007, recognizes major international artists who have a strong association with the Hall. Recipients so far include Andras Schiff, Thomas Quasthoff, Menachem Pressler and Dame Felicity Lott. In 2012, Gramophone announced that the Takács was the only string quartet to be inducted into its first Hall of Fame, along with such legendary artists as Jascha Heifetz, Leonard Bernstein and Dame Janet Baker. The ensemble also won the 2011 Award for Chamber Music and Song presented by the Royal Philharmonic Society in London.

The Takács Quartet performed Philip Roth’s Everyman with Meryl Streep at Princeton in 2014, and again with her at the Royal Conservatory of Music in Toronto in 2015. The program was conceived in close collaboration with Philip Roth. The Quartet is known for such innovative programming. They first performed Everyman at Carnegie Hall in 2007 with Philip Seymour Hoffman. They have toured 14 cities with the poet Robert Pinsky, collaborate regularly with the Hungarian Folk group Muzsikas, and in 2010 they collaborated with the Colorado Shakespeare Festival and David Lawrence Morse on a drama project that explored the composition of Beethoven’s last quartets.

The Takács records for Hyperion Records, and their releases for that label include string quartets by Haydn, Schubert, Janáček, Smetana, Debussy, and Britten, as well as piano quintets by Franck and Shostakovich (with Marc-André Hamelin), and viola quintets by Brahms (with Lawrence Power). Future releases for Hyperion include the Dvořák disc with Lawrence Power, the Dohnanyi Piano Quintets with Marc-André Hamelin, and piano quintets by Elgar and Amy Beach with Garrick Ohlsson. For their CDs on the Decca/London label, the Quartet has won three Gramophone Awards, a GRAMMY® Award, three Japanese Record Academy Awards, Disc of the Year at the inaugural BBC Music Magazine Awards, and Ensemble Album of the Year at the Classical Brits.

The members of the Takács Quartet are Christoffersen Faculty Fellows at the University of Colorado Boulder and play on instruments generously loaned to them by a family Foundation. The Quartet has helped to develop a string program with a special emphasis on chamber music, where students work in a nurturing environment designed to help them develop their artistry.  The Takács is a Visiting Quartet at the Guildhall School of Music and Drama, London.

Tickets for the Takács Quartet’s performance are $26-36, with $10 student tickets available. Tickets can be purchased at the Eastman Theatre Box Office, 433 East Main St.; by phone (585) 274-3000; or online at http://eastmantheatre.org