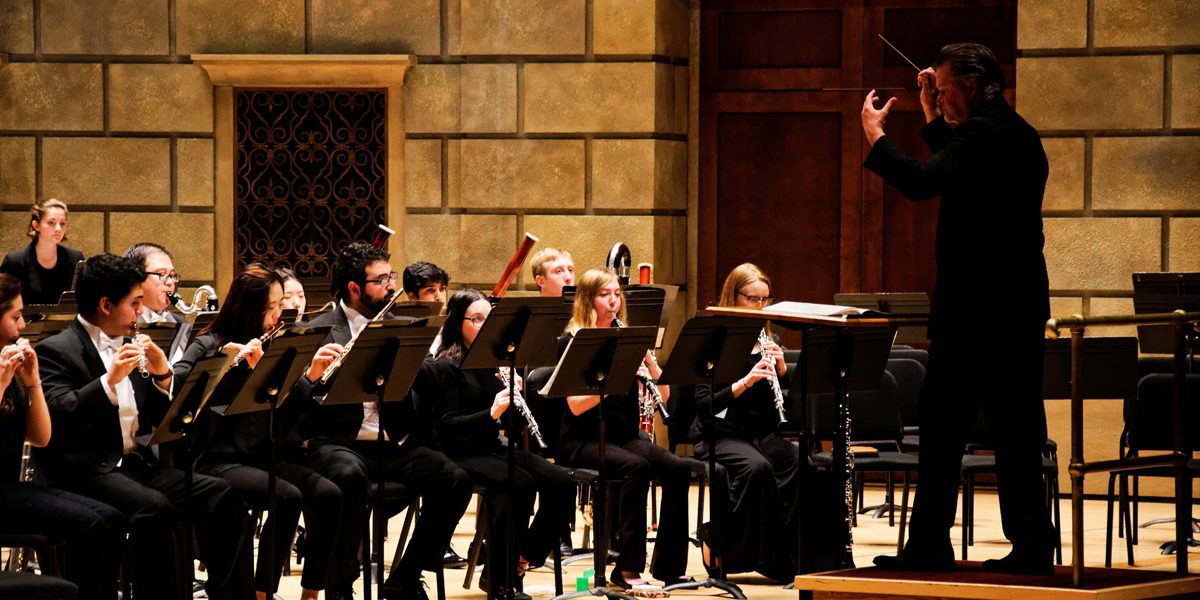 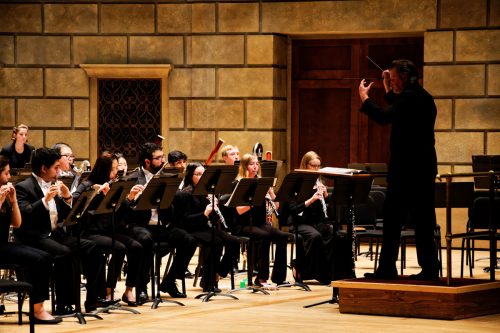 By Jessica Kaufman, Assistant Director of Content and Public Relations

Mark Scatterday, professor of conducting and chair of the Conducting and Ensembles Department at Eastman School of Music, has a long history of active involvement in the Rochester community outside of the school’s walls. For him it is all about connections.

Having previously taught at the high school level (including ensembles in both elementary and middle school) prior to his collegiate work at both Cornell and now Eastman, Scatterday has continued to give clinics and volunteer at various schools in the Rochester area, because as he points out, “We’re in the music education business here at Eastman. It’s important to keep reaching out to young people in the community and use our skills there too.”

One such way Scatterday felt his skills could be of use was collaboration on a joint concert with The Eastman Wind Orchestra and Fairport’s High School Concert Band, under the direction of William Tiberio. “We have a lot in common in terms of how we think about the growth and education of young people,” Scatterday reflects on Tiberio.  The two connected strongly upon Scatterday’s arrival to Rochester and they continued to forge a working relationship, as well as personal friendship, with Scatterday guest conducting Fairport’s Concert Band, and Tiberio conducting Eastman Community Music School Educators Wind Ensemble and Jazz Ensemble, in addition to his work at Fairport.

The collaboration between the two groups seemed ideal, both from a performing and outreach perspective, in a concert which occurred Monday, November 6, at Kodak Hall at Eastman Theatre. Each group planned to perform pieces from its own repertoire, but when it came to selecting a piece for the combined ensembles, Scatterday was thoughtful in his approach. “With high school students, it’s a bigger picture for me,” he explained, clarifying that with his own Eastman ensemble students he looks for a good eclectic mix that is pedagogically sound for all students to optimally learn. With this joint venture, however, he wanted to “bring in a more sophisticated musical approach for the high school students and to find music that lends itself to that.”

The Chorale and Alleluia by Howard Hanson fit the bill perfectly. Not only was Hanson a director of Eastman School of Music for over forty years, the piece is ideal for a group with a wide range of skills and experience. Scatterday points out the complexities of the Hanson piece, “I’d conduct this piece with a professional group since there is so much musically you can do with it”. The performance allowed Fairport students to play right alongside Eastman students, absorbing their professionalism and talent, the incredible result of which was evident in the evening’s concert. Even if the Fairport students don’t pursue a professional musician track like their Eastman Wind Ensemble counterparts, Scatterday hopes they will become future “good artistic citizens of the world”– and what community wouldn’t want more of those?